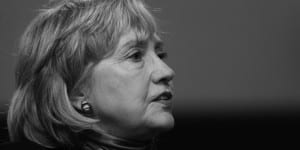 Senior campaign advisor Minyon Moore was linked to a scheme to fund pro-Clinton operations in four states and Puerto Rico to the tune of $608,750 during Clinton’s tough campaign for the Democratic presidential primary, the daily reported, citing documents from US District Court in Washington.

US campaign finance laws impose limits on funding contributions to candidates and their operations, contributions which must be reported to federal authorities. The shadow get-out-the-vote campaign was off the books.

The revelations, potentially damaging to the former secretary of state who is mulling a second White House bid, came to light in statements by Washington businessman Jeffrey Thompson, who pleaded guilty Monday on corruption charges in a case largely relating to his role in the capital city’s 2010 mayoral race.

No evidence has shown that Clinton was aware of the efforts, prosecutors reportedly said. But Thompson told investigators Moore played a key role in the shadow campaign to boost Clinton’s standing with urban communities in states like Texas and North Carolina.

“In or about February 2008, Individual A asked Thompson to fund street teams that would be paid to assist Presidential Campaign 1 during upcoming primary elections,” according to the statement of offense.

Persons familiar with the case told the Post that Individual A referred to Moore and that Presidential Campaign 1 was Clinton’s.

Thompson said Moore arranged for the funding and fed internal campaign materials to Thompson, who would disseminate the strategic information to the street teams, the Post said.

Such action by Moore could have violated campaign finance laws, which bar representatives of a campaign from arranging for illegal contributions.

Moore has close ties with former president Bill Clinton and his wife Hillary, who narrowly lost her historic race for the Democratic nomination to President Barack Obama.

Moore is seen as potentially playing a significant role should Clinton decide to run again in 2016.

A spokesperson for Moore’s consulting firm, Dewey Square Group, told the paper that Moore has been “fully cooperating” with investigators.

Prosecuting Moore may prove difficult, though, as the five-year statute of limitations expired last year.