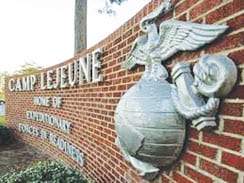 The Veterans Affairs Department has determined that eight medical conditions are linked to service at Camp Lejeune, N.C. from 1953 to 1987, and veterans with these diseases who were stationed at the sprawling Marine Corps base are eligible for disability compensation.

VA officials said Thursday that these eight diseases that have been determined to be service-connected to consuming contaminated drinking water at the base: kidney cancer, liver cancer, non-Hodgkin lymphoma, leukemia, multiple myeloma, scleroderma, Parkinson’s disease and aplastic anemia or other myelodysplastic syndromes.

VA Secretary Robert McDonald said research by health experts at the Veterans Health Administration and the Agency for Toxic Substances and Disease Registry, an arm of the Centers for Disease Control and Prevention, indicated that the risk of developing these illnesses is elevated by exposure to contaminants found in the water, including perchloroethylene, trichlorotheylene, benzene and other volatile organic compounds.

“The water at Camp Lejeune was a hidden hazard, and it is only years later that we know how dangerous it was,” McDonald said. “We thank ATSDR for the thorough review that provided much of the evidence we needed to fully compensate veterans who develop one of the conditions known to be related to exposure to the compounds in the drinking water.”

Nearly a million people, including troops, family members and civilian employees working at Camp Lejeune from the 1950s through the 1980s were exposed to these chemicals and other cancer-causing agents in the base’s drinking water, supplied by two water treatment facilities polluted by dry cleaning compounds, leaking underground storage tanks, industrial spills and poor disposal practices.

The VA has provided health care or reimbursement for medical costs for veterans who served at Camp Lejeune at least 30 days during the affected period or family members with 15 illnesses related to exposure to water contaminated by solvents and fuels, but it had not awarded “presumptive status” to any condition until now.

The changes will take effect after VA publishes regulations regarding these presumptions, and will apply to new disability claims.

Veterans who have previously been denied on such claims may seek to be re-evaluated. Also, any pending claims that might be denied under current regulations will be placed on hold until the VA issues its final rules, according to a department press release.

The bedrock eligibility rules will be that veterans must have one of the eight specified conditions and must have served at Camp Lejeune between Aug. 1, 1953, and Dec. 31, 1987.

The new rules also will expand eligibility to reserve and National Guard members who served at Camp Lejeune for any length of time during that period.

A VA spokeswoman said compensation awarded as a result of the proposed regulations, if adopted, will “be effective no earlier than the date the final rule is published.”

Veterans have expressed frustration over the low rate of claims approvals for illnesses related to the Camp Lejeune water. Hundreds of veterans attended a meeting of the Camp Lejeune Community Assistance Panel on Dec. 5 in Tampa to express frustration with the VA’s handling of claims and plead with VA officials to improve the process.

Paul Maslow, a veteran who walks with a cane and said he has inoperable tumors on his spine and elsewhere, said he and thousands of former troops need assistance.

“You are not helping us, you are hurting us,” Maslow told VA officials attending the meeting. “And the more you delay, the more of us … are going to die.”

Two senators who pressed VA to change its policies regarding benefits for Camp Lejeune veterans said Thursday they applaud the VA’s decision, calling it a “victory for those who have suffered.”

“The VA has conceded that it will no longer deny disability benefits to Camp Lejeune victims based on ridiculous scientific claims,” Sen. Richard Burr, R-N.C., said.

“VA is finally granting some justice to veterans who were exposed to contaminated drinking water while assigned to Camp Lejeune,” said Sen. Thom Tillis, R-N.C. “The victims of this tragedy have waited far too long to receive disability benefits.”