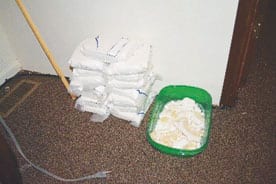 KENOSHA  — Kenosha County Sheriff’s officials say four people were arrested as a search warrant was executed at a home in Kenosha on Tuesday morning, December 15th, and more than $1 million worth of meth disguised as cocaine was recovered.

The search warrant was executed at the home on 50th Street in Kenosha around 6:00 a.m. (near 50th Street and 16th Avenue).

The four men taken into custody are between the ages of 20 and 23.

Officials say these men that were taken into custody were actively working a meth lab while purposely giving the meth the appearance of powdered cocaine — and selling it as cocaine.

The processing lab was used to convert crystal meth into white powder that resembles cocaine. The men would then sell it as powered cocaine.

Cutting agents were used to convert one pound of meth into four pounds of white power lookalike cocaine meth.