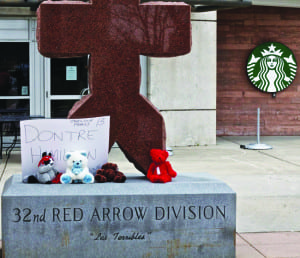 Milwaukee – About 80 protestors in support of the family of Dontre Hamilton occupied Milwaukee’s City Hall this week.

For over seven months protestors have marched on Milwaukee’s streets demanding charges against Officer Christopher Manney for the death of Dontre Hamilton.

Protestors started marching Red Arrow Park after a brief speech by the Hamilton family to City Hall and asked to meet with the mayor.

The mayor was at another function and was not in the building at the time of the demonstration.

Manney shot and killed Hamilton during an altercation in the park.  Autopsy findings released by Hamilton’s family indicate 14 shots were fired with one shot confirmed fired to the back of Hamilton.

Police Chief Edward Flynn fired Manney, saying he didn’t follow department rules in the moments before the shooting, resulting in a struggle that left deadly force as the only option.

The incident began when workers at a nearby coffee shop called police to complain about Hamilton sleeping in the park. Instead of following his training about how to deal with emotionally disturbed people, Flynn said, Manney came up behind Hamilton, placing his hands under Hamilton’s arms and on his chest in what the chief described as an “out of policy pat-down.” He said the officer had no reason to believe before the confrontation that Hamilton was dangerous.