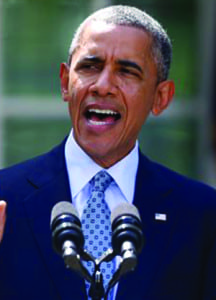 WASHINGTON – In the face of an unyielding Congress, President Barack Obama said This week that he will no longer wait for Republicans to act on immigration and will move on his own to make policy changes in what has been a top second-term priority of his presidency.

Obama said he will refocus immigration enforcement onto a Mexican border that has seen a tide of children crossing illegally from Central America. That means putting resources into deporting people who are the most recent border-crossers or individuals who pose a threat to public safety and national security.

“I take executive action only when we have a serious problem, a serious issue, and Congress chooses to do nothing,” Obama said. “And in this situation, the failure of House Republicans to pass a darn bill is bad for our security, it’s bad for our economy and it’s bad for our future.”

Obama said he decided to bypass Congress after House speaker John Boehner informed him last week that the House would not vote on an immigration overhaul this year. A congressional leadership aide said Obama and Boehner spoke privately before an event last week at the white House honoring U.S. golfers who won last year’s Presidents Cup,

Obama said there are enough Republicans and Democrats in the House to pass an immigration bill today, and says he would sign it.

But Obama said he’s waited for more than a year to give Boehner space to act.

Obama said the thousands of unaccompanied children showing up on the border underscore the need to drop the politics and act on immigration.

Obama’s decision effectively declares that a broad based change in immigration policy is dead for the year, and perhaps for the remainder of his administration. Changing immigration laws and providing a path to citizenship for about 11 million immigrants in the country illegally has been one Obama’s top priorities as he sought to conclude his presidency with major second-term victory.

Obama’s ability to undertake changes on his own is limited.

He is instructing Homeland Security Department Secretary Jeh Johnson and Attorney General Eric Holder to present him with executive actions he can take without congressional approval by the end of the summer.

Still, in responding to the influx of unaccompanied children, Obama plans to concentrate immigration resources on the border areas. The move will effectively further reduce the number of deportations in the country’s interior by stressing enforcement action on individuals who are either recent unlawful border crossers or who present a national security, public safety, or border security threat.

The decision coincides with a White House request to Congress for new powers to deport newly arrived immigrant children traveling without their parents.

As such, Obama’s actions represent a delicate balancing act between responding to what the White House has called a “humanitarian crisis” over unaccompanied children and a demand from immigration activists to reduce the administration’s record number of deportations.

The Obama administration also has taken steps already to focus deportations on people with more serious criminal records or those who pose a threat. But this so-called “prosecutorial discretion,” while harshly criticized by Republicans, never succeeded in calming concerns in immigrant communities about how deportations are conducted.

Obama on Monday was dropping by a meeting at the White House among immigration overhaul advocates and Chief of Staff Denis McDonough and Obama senior adviser Valerie Jarrett. Many of those advocates reacted harshly to Obama’s plan Monday to seek emergency money from Congress that would, among other things, help conduct “an aggressive deterrence strategy focused on the removal and repatriation of recent border crossers.”