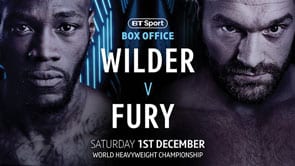 Fathom Events and SHOWTIME PPV® Present the Epic Matchup of Undefeated Champs Live From STAPLES Center in L .A.

DENVER,– WBC Heavyweight World Champion Deontay Wilder (40–0, 39 KOs) will defend his title against lineal champion Tyson Fury (27-0, 19 KOs) in a blockbuster matchup on Saturday, December 1. Boxing fans will want to catch all the action, larger-than-life on the big screen, at their local cinemas as these undefeated warriors battle it out LIVE from STAPLES Center in Los Angeles.

Tickets for “Wilder vs Fury” can be purchased online by visiting www.FathomEvents.com or at participating theater box offices.

The live broadcast of “Wilder vs Fury,” presented by SHOWTIME PPV and Fathom Events, is set for Saturday, December 1 at 9 p.m. ET/ 8 p.m. CT/ 7 p.m. MT/ 6 p.m. PT/ 5 p.m. AK/ 4 p.m. HI. Fans throughout the U.S. will be able to enjoy the event in more than 400 select movie theaters through Fathom’s Digital Broadcast Network (DBN). A complete list of theater locations is available on the Fathom Events website (theaters and participants are subject to change).

“Wilder vs Fury” tests the raw power of Wilder against the unmatched size and mobility of Fury. America’s only heavyweight champion since 2007, former Olympian Wilder has won by knockout in all seven of his WBC title defenses. Fury, the “Gypsy King,” is a former IBF, WBA and WBO heavyweight world champion who currently holds boxing’s coveted lineal heavyweight title.

The evenly matched showdown of top-ranked heavyweights pits boxing’s two largest champions against each other in the most significant heavyweight fight in the United States since Lennox Lewis vs. Mike Tyson in 2002. In addition to physical stature – Wilder is 6-foot-7, Fury 6-foot-9 – both are among boxing’s greatest showmen, with outsized personalities and heavyweight charisma.

“The fight world has been waiting for an epic heavyweight battle like this for more than 10 years,” said Ray Nutt, Fathom Events CEO. “We are proud to partner with Showtime to give fight fans the opportunity to view, right from their local cinemas, what is certain to be an awesome spectacle.”

Review: ‘Bullet Train’ goes off the rails, but Pitt doesn’t

August 4, 2022Comments Off on Review: ‘Bullet Train’ goes off the rails, but Pitt doesn’t

By JAKE COYLE Aboard the speeding locomotive of “Bullet Train” ride at least five assassins, one venomous reptile (a snake on the train), countless glib Guy Ritchie-esque slo-mo action sequences, and one bucket-hat wearing Brad Pitt. It’s a lot of ingredients that go into this candy-colored, battle royale of a movie. But the only one […]

Wisconsin DMV extends hours ahead of primary Steps to obtain an ID to vote explained The Wisconsin Department of Transportation Division of Motor Vehicles (DMV) will extend hours next week at customer service centers that are open on Monday (August 8) and/or Tuesday (August 9). These centers will remain open until 6 p.m. The extended […]

Wisconsin’s Fall Primary Election Have an ID to Vote Wisconsin Department of Transportation Division of Motor Vehicles (DMV) reminds voters to check and be sure that they have the proper identification needed to vote in next month’s state primary election (August 9). Wisconsin driver licenses or IDs are the most common form of identification used […]