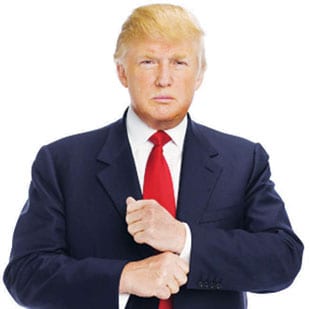 The rise of Donald Trump as the front runner for the Republican Party presidential nomination is both bewildering and insane.

Trump is not an extraordinary speaker, so his ability to convince people that he will “make America great again” is baffling. So why do Americans believe in him?

Trump’s rise can be attributed to the ignorance of the uneducated populations. He has figured out that Americans are more interested in the latest line of video games than they are concerned about the economic hardships many of them face day today.

The Americans are disoriented by the wars fought in Iraq; he is convincing them that America has yet to win in the Middle East and that, without him leading the nation, the United States faces a growing threat emanating from the Muslim world.

To begin his quest for the American presidency, Trump highlighted his success as a business man. When he announced his candidacy for president, Trump boasted about himself and the billions of dollars he has. Never mind that on four occasions he filed for bankruptcy. In doing so, he reaped benefits from the American bankruptcy law, which protected his wealth. Trump was able to get himself viewed favorably by the public by bragging about how he used this law to get rich.

Trump went on speaking at rallies where he attacked immigrants for the crime, drug and economic problems of America. These rallies, along with his reality television shows, are where he built his experience as a public speaker. Americans attended his rallies, listening to his hate speeches and approving of his message.

He talks of American pride and honor. He talks about whom to blame for America’s problems. Not unsurprisingly, Trump got standing ovations from the people following his message.

With his strong showing in political polls and his growing following attending his public speaking events, Trump is able to attract a mass of people who believe America must return to the days in which ethnic minorities are second class citizens.

The Republican Party is not totally supportive of Trump. However, the establishment in the party is unable to control him for fear he’ll break away from the party and take with him the party base that supports him. His threats of creating a third political party in the United States has kept the Republican establishment from attacking him for his bombastic speeches.

Although Trump is leading the other Republican presidential candidates running for president of the United States, he is aware that he still needs to grow his power within the party, because the other candidates still pose a threat to his candidacy. So Trump has been successful in attacking his opponents with misinformation and pointing them out as weak leaders.

Wisconsin Governor Scott Walker, who suspended his quest for the presidency, is a great example of Trump’s attack against his competitors.

To weaken Walker, who once was a leading candidate, Trump simply pointed out how badly Wisconsin was doing economically. Trump said of Wisconsin that the state was a mess under Walker’s leadership. Shortly after he said that, Walker’s ratings fell, forcing him to retire his campaign and reveal the hole in his presidential campaign budget.

In short, Trump’s rise is calculated. At each point at which he feels threatened, he destroys his opponent, building a favorable view of him by the public.