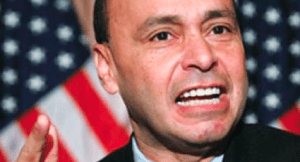 By Elizabeth Llorente
Published November 5, 2013 Fox News Latino U.S. Rep. Luis Gutierrez, the vocal proponent in Congress for a change in policy that would give undocumented immigrants who were brought to the United States as minors a chance to legalize their status, has cut off ties with two groups that have coordinated provocative protests in recent months.
Gutierrez, a Democrat from Illinois, on Monday evening issued a press release announcing that he was no longer going to work with the National Immigrant Youth Alliance (NIYA) and their affiliated advocates at DREAMActivist.org The congressman said the final straw in a series of actions by the groups that he has found unsettling was the secret recording by a NIYA representative of what was to have been a confidential discussion last week between Gutierrez and parents of immigrants who are being held in an immigrant detention center in El Paso, Tex.
It just shows me how dangerous they are. How Nixonian…Why target the leading voices in the Senate and House for immigration reform?

– U.S. Rep. Luis Gutierrez. “It just shows me how dangerous they are,” Gutierrez said in an interview Tuesday with Fox News Latino. “How Nixonian…Why target the leading voices in the Senate and House for immigration reform?”

“That meeting was … recorded surreptitiously by NIYA, without the knowledge of the parents, the Congressman or his staff,” Gutierrez said in a statement sent Monday night to the media. “It is unfortunate that the actions of the advocates in this case are preventing this office from being able to work with parents and family who are understandably and rightly concerned for the safety of their son or daughter.”

NIYA helped coordinate two high-profile protests that involved groups of people who approached U.S. authorities at the U.S.-Mexican border in July and September, and requested political asylum. The groups – nine were in the first, and about 30 in the second – comprised people who were brought to the United States illegally as minors and who were deported or left on their own.
The two groups staged their actions to protest U.S. immigration policies and to demand an end to all deportations. All nine immigrants from the first group were released pending a final decision on their asylum claim; some from the second group have been released, others remain detained and one woman was recently deported. Many advocates of more lenient immigration policies have heralded the risky moves by the protesters, calling them heroes. But critics, among them advocates of more liberal immigration policies, have accused them of staging publicity stunts.
The groups are known as Dream 9 and Dream 30, after the congressional measure, the DREAM Act, which seeks to provide immigrants brought as minors a path to legal status.
Gutierrez has expressed exasperation for months over the high-risk moves of both groups, saying that the provocative nature of these actions undermines his efforts to win support for a comprehensive immigration reform bill.

Gutierrez said the leader of NIYA, Mohammad Abdollahi, who was born in Iran and raised in Michigan, has expressed racist [anti-white] views on the Internet, and bragged about how hard it would be for the United States to deport a gay person to Iran.

Gutierrez said it bothers him that someone who feels no fear of deportation is organizing people who are subject to immigration enforcement for risky encounters with U.S. border officials. “The leadership is undeportable,” he said, adding that Abdollahi and others who are at low risk are manipulating and exploiting other immigrants.

Efforts to get a response from NIYA were unsuccessful. “In talking with the families, the congressman and his staff believe that the parents and families were being manipulated by NIYA and its leaders and were not well informed about the law and the legal process,” said Gutierrez’s statement, which stressed that he will continue to work with the detained immigrants and their parents directly.

“The congressman is warning parents that these actions can hurt the chances that young people will be able to return to the United States or live legally in the United States.”
Earlier on Monday, two of the Dream 30 who were released from detention were arrested after refusing to leave the offices of Gutierrez and Rep. Ruben Hinojosa, a Texas Democrat, whom the protesters had gone to see about immigration reform. U.S. Capitol Police confirmed that the immigrants, Marco Pacheco and Marcela Espinoza, were arrested for unlawful entry. In a press release announcing their plans to hold a “sit-in” in the congressional offices, NIYA said: “They will go to the offices and refuse to leave until the elected officials speak out in support of stopping the deportations of the #Dream30.”

The details of the private conversation that Gutierrez said was “surreptitiously recorded” are unclear. Gutierrez said that the meeting was very emotional, and the parents discussed things that they haven’t told others.

DREAMActivist.org alleged on its Twitter page that Gutierrez, in reference to a founder of the groups, said to one of the parents of the detained activists: “‘Did you know he’s gay?’ – @LuisGutierrez, to #Dream30 parents about 1 of our founders. Guess he hoped subtle homophobia would go a long way”. Gutierrez said to Fox News Latino that his point in asking the question was to make the parents aware that Abdollahi was not making the same personal sacrifice — and taking the same level of risk — that his organization had encouraged their children to make.
“I said ‘Somebody is putting you at risk who has no risk,'” Gutierrez said.”I wanted the parents to understand they’re being manipulated by someone who is bullet-proof.” DREAMActivist conceded recording the meeting in a response to a tweet inquiring about it.

The response was: “@latinorebels Well, if a member of Congress can troll our members’ Facebook, #Dream30 parents ought to record what he says about their kids.” Supporters for the Dream 9 and Dream 30 assailed the public denunciation of NIYA and DREAMActivist.org by members of Congress and others. They also criticized the arrests. “It is unfortunate that Congressman Gutierrez has issued a statement retracting his previous support of the DREAM 30,” said Matthew Kolken, an immigration attorney who has been a vocal defender of the two Dreamer groups that requested asylum.

“My understanding is that his decision was predicated on information gleaned from social media, ill-advised statements taken out of context, provided to him by individuals with ulterior political motives that have repeatedly targeted the movement’s organizers, and their lawyers.”

“Mr. Gutierrez has been at the tip of the spear fighting for immigration reform for all these years,” Kolken said in an e-mail to Fox News Latino, “and my concern is that he is being manipulated, and his reputation is being sullied in the process.” Jasmine Mora, communications director for the Congressional Hispanic Caucus, replied that “fixing our nation’s immigration system will require putting pressure on Republican members and senators. In the past, (Hinojosa’s) staff has met multiple times with the DREAM 30 group to hear their concerns.” Meanwhile, many in the immigration reform movement have watched the growing rift within it with concern. R. Andrew Free, an immigration attorney in Tennessee, tweeted: “Today’s #BringThemHome beef between @LuisGutierrez and @TheNIYA and @DreamAct should prompt soul-searching critical reflection in our mvmt”.

The Coalition for Humane Immigrant Rights of Los Angeles, or CHIRLA, said in a widely distributed statement that it felt compelled, amid the fallout between Gutierrez and the Dreamer organizations, to urge “supporters of the immigrant rights movement to keep our eyes on the prize and double our collective efforts to make sure Congress passes a fair, humane, and comprehensive immigration reform package before the end of 2013.”

“There is no question in our mind that immigrants have no greater champion or fiercer advocate than Representative Luis Gutierrez,” said Angelica Salas, executive director for CHIRLA. “And there should be no reason why the #Dream30 must remain detained one minute longer when all they did was bring to the fore the impact of a cruel and broken immigration system.”
“At this critical juncture, we are by far healthier, stronger, and armed to fight for immigration reform when we step back, look around,” she said, “and take a moment to acknowledge that each of us is essential to a victory that, although imperfect, is attainable.”