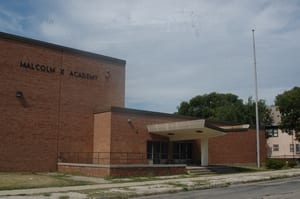 By Lynda L. Jones
It began as an interest in a MPS unused school building that was “not for sale.’ Then it developed into a neighborhood saturated by yard signs, and later a march consisting of young students being taken out of school to march with teachers, school staffers and even Milwaukee ‘s Sheriff David A. Clarke in an attempt to force MPS to sell a building it had other plans to develop.
The leadership at St. Marcus Lutheran School, a private school set its sights on purchasing the Malcolm X Academy Campus located on the corner of North 1st. and East Center Streets, even though that particular property was not for sale. Rather than consider another building MPS offered, St. Marcus organized marches, yard signs and children marching during school hours as a public tactic used to force MPS to sell Malcolm X to the school. Following the march, supporters of St. Marcus then saturated the MPS Board meeting, where only rough half the crowd supported their efforts. The Milwaukee Board of School Directors is moving forward with other plans for the site, voting last Thursday, Sept. 26 to enter into negotiations with 2760 Holdings, LLC for the purchase of the property at 2760 North First Street (Malcolm X Academy). 2760 Holdings has 90 days to negotiate terms of a sale.
Two State legislators who pushed legislation last year requiring the sale of unused schools are now increasing their efforts to MPS to sell unused buildings even if the district has plans for them. The legislators leading this bill are State Senator Alberta Darling (R), and State Representative Joe Sanfelippo (R).
Under the current law, the City of Milwaukee owns the school buildings and school grounds of the Milwaukee Public School (MPS) District. Generally, city-owned property used for school purposes may be sold only upon written request of MPS board and if the Milwaukee Common Council adopts a resolution approving the sale.
This new bill would force the city to sell schools that are unused or underutilized for at least 12 consecutive months, or if the MPS board had declared a property surplus within the last five years. These buildings would be sold even if MPS has identified them for other uses, including expanding popular programs.
The bill that the republican legislators fails to recognize that MPS has already made significant use of formerly vacant buildings that is increasing options for parents and taking hundreds of students off of wait lists for popular programs.
The district has strategically used buildings to grow high-achieving programs and meet parental demand for popular programs. MPS has reused eight buildings for such programs. An example of high-achieving program is the expansion of Golda Meir from a 3rd to 8th grade program to a high school by using the once-vacant Milwaukee Education Center facility on King Dr. and Walnut. Hundreds of parents were able to move off the waiting list for the Montessori program at Fernwood School when MPS reopened Tippecanoe School as Howard Montessori programs.
Eleven buildings have been leased to highly popular MPS charter schools, run by community leaders including BEAM, Banner and Carmen charter schools.
Four buildings have been sold including two to Milwaukee College Prep. The former Jackie Robinson Middle School was sold and converted into The Sherman Park Senior Living Community. This development revitalized a historic five-acre parcel in the heart of the historic Sherman Park neighborhood with a multi-generational campus including 68 senior apartments.
The flexibility that MPS has now has made these type of projects successful and allows the district to meet parental demand and open opportunities for greater student success.