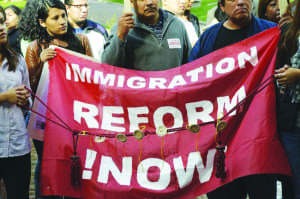 Dave Brat ran a campaign attacking  congressional leader Cantor, who is seen as one of the most ultra-conservative voices in congress, as a backer of immigration reform efforts tea party activists view as “amnesty” for undocumented immigrants.

The defeat of Cantor signals that the battle for immigration reform was dealt a knockout blow, and any effort to move it forward now will be considered dead on arrival.

Immigration reform will become a driving political issue in the coming years and will without question divide the country in a way not seen since the anti-Vietnam war movement.

For Democrats the promises made to the Latino community to win an immigration reform package that gives undocumented individuals opportunity to stay in country, will be a promise that will be hard to keep. For Republicans, immigration reform will become the issue that threatens to become a Déjà vu of the 2012 elections, that saw an electoral demographic nightmare the GOP can’t possibly survive in 2016.

As another result of Cantor’s defeat, the Obama administration will be feeling an intense and radical political campaign aimed at forcing him to his executive authority to stop the deportations of the undocumented.

The White House has to be scrambling to find another means to get immigration reform on the front burner in Washignton, they have no choice. Cantor’s defeat ends all efforts on the Hill by House Republicans to act on a legislative overhaul around immigration.

“I don’t know what this means. I’m very confused,” Rep. Mario Diaz-Balart (R-Fla.), who has been working behind the scenes to gain support for immigration reform, said of Cantor’s defeat in a phone interview. “It clearly adds a lot of confusion and uncertainty and that’s the last thing we need.”

The startling defeat of Eric Cantor by Dave Brat, a little-known economics professor, in Virginia’s Republican primary, is an indication of how extreme the GOP base has become. Imagine, the GOP base full of Mark Belling type fanatics, energized by this victory and moving the country farther to neo-conservative dogma.

Brat repeatedly attacked Cantor for supporting “amnesty” for undocumented immigrants. Rest assured that congressional Republicans who were Luke warm to the idea, are now taking this as a lesson, and are more likely to drop the idea of amnesty from their list of immigration reform possibilities.

Cantor’s defeat guarantees that the GOP will move even further to the political right.

This is bad news for the democrats and the promise they made to the Latino immigrant movement. With the GOP moving farther to the right, the language used by Brat to defeat Cantor will be embraced by working-class and some middle-class whites experiencing a downward economic ride.

The Brat message against immigration reform will be easy to swallow for these people who are in economic distress.  They are easy prey for demagogues blaming immigrants, the poor, African-Americans, and the U.S. government for their economic condition.