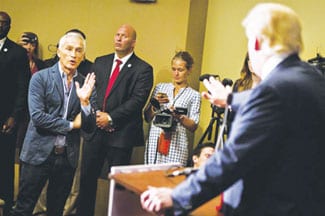 IOWA – Donald Trump’s press conference in Dubuque, Iowa went off the rails fast on Tuesday night when Univision anchor Jorge Ramos started questioning the candidate even though he had not been specifically called on by him.

“Excuse me, sit down, you weren’t called. Sit down!” Trump shouted at Ramos as he protested, “I have the right to ask a question.”

“No you don’t, go back to Univision,” Trump replied, attempting to call on another reporter in the room. At that point, security physically removed Ramos from the room.

Moments later, another reporter confronted Trump about Ramos’ removal. “I don’t believe I ever met him, except he started screaming and I didn’t escort him out, you’ll have to talk to security,” Trump said. “Certainly he wasn’t chosen. I chose you and you’re asking me questions. He just stands up and starts screaming so, you know, maybe he’s at fault, also.”

“I don’t even know where he is,” he added. “I don’t mind if he doesn’t come back, frankly.” Later, when another reporter asked Trump why he won’t take “tough questions,” he referred to Ramos as “obviously a very emotional person.”

On CNN last night, Ramos accused Trump of “spreading hate” with his immigration comments, asking, “How is he going to deport 11 million people? By bus? By plane? Is he going to bring the army to do that? Can you imagine the human rights violations that would create?”

Ramos later returned to the press conference room where he was able to confront Trump directly.