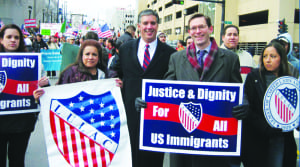 However, at this years convention one of those leaders announced his resignation from his position as National Mid-West Vice President.

On July 14, 2014, a little over 13 months after being elected to the position of LULAC National VP – Midwest, Darryl Morin resigned from his duties citing the need to be with his family, focus on his business and participating in more local community efforts.

Before Morin was elected LULAC National VP – Midwest, he served as

“After serving in numerous LULAC council, state and national roles, the time has come for me to spend more time and energy with my family, business and on local efforts to serve our community. As such, please accept this letter of resignation”, wrote Morin.

The League of United Latin American Citizens was created to combat the discrimination faced by Hispanics in the United States. LULAC was established  on February 17, 1929 in Corpus Christi, Texas. Since its creation, the organization has grown; it has a national headquarters, active councils in many states, and a professional staff.

Despite its national visibility, LULAC has lost strength in recent years because of a declining and less-active membership base and decreasing operating funds.

Morin sought to unite LULAC when he become LULAC National VP – Midwest to address these issues, according to his letter, that effort did not happen as he clearly laments: “as LULAC looks forward, I hope the organization can once again unite for the good of the community.”

A highlight of this years LULAC National Convention was the address made by the First Lady Michelle Obama who spoke to a crowd of nearly 1,500 Latino leaders, activists and students.

“Make no mistake about it,” the First Lady said, “we have to keep on fighting as hard as we can on immigration, and as my husband said, we are going to do whatever administrative action it takes to fix this broken system.”