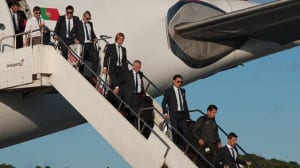 After Australia, the first of the 31 teams to land in Brazilian territory for the 2014 FIFA World Cup™ last week, Croatia and Iran arrived in the country on Tuesday, 3 June.

Brazil’s rival in the opening match on 12 June at the Arena de Sao Paulo, the Croatian national team arrived at the Salvador International Airport at 4:15pm (local time). From there, the delegation went straight to the Team Base Camp in Praia do Forte, Mata de Sao Joao, in the metropolitan region of Salvador .

In addition to the hosts in Group A, Croatia will face Mexico and Cameroon in the group stage.

Iran arrived in Brazil shortly before the Croatians, landing at the Sao Paulo International Airport at 4:10pm (local time). The Iranians, who start the campaign in the FIFA World Cup against Nigeria on 16 June in Curitiba, also face Argentina (21 June) and Bosnia and Herzegovina (25 June), and will prepare for the group stage matches at the Corinthians Training Centre in Sao Paulo.

Upon arrival in Sao Paulo, coach Carlos Queiroz said that Iran will do everything possible to have a successful campaign in the FIFA World Cup.

“As we came from the other side of the world we arrived earlier to start our preparation. We have earned the right to play against the best and now it’s time to do it. We have 90 minutes in each game and we will use them the best possible way”, Queiroz said.