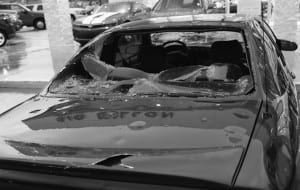 Severe storms that pounded parts of Nebraska and Iowa with baseball-size hail Tuesday are expected to generate up to 4,500 property damage claims and as many as 4,000 automobile claims for Madison-based insurer American Family Insurance.

The insurance company has dispatched a catastrophe team to help local employees in the aftermath of the storms, which also dumped four inches of rain on some areas. American Family employees will be contacting customers and setting up appointments to assess damage from the storms, which struck from Norfolk, Neb. to Council Bluffs, Iowa.

“An additional 20 auto appraisers are going out there as well as an additional 25 property adjusters,” American Family spokeswoman Sandra Spann said Wednesday.

The expected 3,500 to 4,500 in property claims include homes, businesses, farms and ranches.

“From what I understand it was still drizzling out there this morning, but once it dries off people are going to go up onto the rooftops and take a look and see what sort of damage there is,” Spann said. “So we’ll get more claims coming in as the day goes on.”

Preliminary claims estimates weren’t immediately available from Wisconsin-based property insurer Acuity, of Sheboygan, and Church Mutual, of Merrill, which insures churches and other houses of worship around the U.S.

In the northeast Nebraska cities of Norfolk and Blair, residents reported shattered windows in homes and vehicles after hail passed through.

On I-29 north of Council Bluffs in western Iowa, more than 25 vehicles had their windows shattered by hail, said Terry Landsvork, an observation program leader for the National Weather Service in Valley, Neb.

The storm also tracked across parts of Kansas, Missouri, South Dakota and Illinois.

The Associated Press contributed to this report.