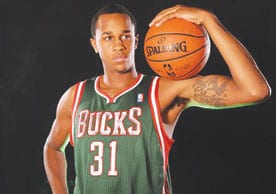 A star player with the Milwaukee Bucks posted on social media that he was racially profiled.

The store’s owner said it was a misunderstanding because Henson’s car looked like a car that was used in a previous robbery at the store.

Henson posted on Instagram that he went to Schwanke-Kasten jewelry store in Whitefish Bay to look at a watch.  He said employees locked the doors and told him to leave.

Henson wrote the following post: ”Went to @schwankekasten jewelry today in White-Fish Bay during regular business hours . They locked the door and told me to go away . After I rang the doorbell twice everyone went to the back. No answered the door or told me what was going on. This was followed by two police cars pulling up and parking across the street and watching me for 5 minutes ( I assumed they were called by the store ) . I was then approached by 2 officers and questioned about the dealer vehicle I was in which is apart of my endorsement deal with Kunes country Chevrolet and asked me what I wanted amongst other things that were just irrelevant to me being there just trying to shop at the store like a normal paying customer would do . I told them I was just trying to look at a watch. He then had to go in the back and tell them to come out it was safe but this is after they ran my plates and I overheard them talking about doing more of a background check on the car. The employees finally came out of the back and proceeded to conduct business like they previously were as we walked up . This was one of the the most degrading and racially prejudice things I’ve ever experienced in life and wouldn’t wish this on anyone . This store needs to be called out and that’s what I’m doing . You have no right to profile someone because of their race and nationality and this incident needs to be brought to light and I urge anyone who ever is thinking of shopping here reads this and doesn’t bring any business to this discriminatory place .”

WISN 12 reported that when their reporter went to the store, they “found the doors locked and items removed from the front windows.”

WISN 12 News reports that they spoke with the owner of the store, Thomas Dixon, who said the entire matter is all a misunderstanding.

Dixon told reporters that his store has had been robbed three times in last 18 months, and that “one of the suspect vehicles involved is from the same dealership as Henson’s vehicle.”

Dixon’s employees told him they saw the vehicle with dealer plates, and that they became suspicious because of the past robberies.

Dixon said “the misunderstanding is over the vehicle involved, and was not due to racial profiling.”

Henson signed a four-year contract extension with the Bucks earlier this year.

A statement by the Milwaukee Bucks said in part: “We’ve spoken to John about what happened. It’s very troubling to all of us. Nobody should be treated that way.”

The following statement was issued Tuesday by Tom Dixon, president of Schwanke-Kasten Jewelers after he met with Henson:

“I appreciated the opportunity to personally meet with John Henson this morning to look him in the eye, shake hands, and apologize. No one should ever have to experience what he experienced.

We all agree that racial profiling is never acceptable and deeply regret how the circumstances unfolded Friday and Monday.

Henson had this to say about the meeting and apology:

“It doesn`t make it right.  It’s unfortunate.  I came at the time where things were happening to the store — but at the same time, I think steps could have been taken to prevent what happened (Monday) had someone come to the door and said, ‘can I help you?’” Henson said.

Whitefish Bay police late on Monday evening released a lengthy statement to FOX6 News. The full statement is just below:

On Friday, 10/16/15, the Whitefish Bay Police Department responded to Schwanke-Kasten Jewelers, 417 E. Silver Spring Drive, at 3:57pm for a suspicious activity call. Upon arrival, our officer met with an employee of the store who reported they had received a phone call on Thursday, 10/15/15, between 2:00pm and 3:00pm inquiring as to when they close. The employee told our officer they also received a similar call on 10/16/15, again inquiring as to when they closed. The store’s normal closing time is 5:30pm and the store employee made the decision to close at 5:00pm as a precaution.

Schwanke-Kasten Jewelers has been the victim of robberies at their Milwaukee stores in the past 2 years, and there was a theft from their Whitefish Bay store on 9/7/13 when a suspect grabbed four Rolex watches and fled from the store. In the past several years, throughout the upper Midwest, stores that sell Rolex watches have been victims of armed robberies, of which several store employees were hurt in these robberies.

Our officer parked directly in front of Schwanke-Kasten Jewelers store in a dark brown unmarked 2014 Chevrolet Tahoe police vehicle. At approximately 4:58pm, our officer observed four individuals walk up to the door. The officer observed the people walk up to the door, but it appeared that the door was locked. He heard discussion between them and an employee inside the store. At this time, the lights in the store were turned off. The officer observed the people get back into the Tahoe, and they drove away. The officer noticed that the Tahoe had a State of Wisconsin issued dealer license plate. The officer queried the state TIME system to ascertain ownership of the vehicle. It listed to a Wisconsin dealership, but not to a specific vehicle.

Our officer called the dealership and provided an employee with the plate number and a description of the vehicle. The employee stated that the plate listed to a partner dealership and transferred that officer to the other dealership. This person did not recognize the vehicle nor the occupants as being from the dealership. The officer inquired about ways people could get a hold of these type of plates and the employee informed the officer that they ship many cars to Chicago and it’s possible somebody stole the plates.

My officer called the Schwanke-Kasten Jewelers employee back and informed her that he had spoken to the dealership with whom the plates are listed. He informed the employee that the dealership was running low on plates and that the plates were potentially stolen, but that they were not listed as stolen. He advised the employee that if the vehicle came back, to call the station.

On Sunday, 10/18/15, 11:21am, Tom Dixon, the owner of Schwanke-Kasten Jewelers, came to our station and spoke with an officer to report that a Green Bay store that sells Rolex watches was burglarized overnight. He provided our officer with a surveillance photo from that incident of a white male in a mask. He requested extra watch as his store when it opened Monday, 10/19/15.

On Monday, 10/19/15 at 1:20pm, Whitefish Bay officers were dispatched to Schwanke-Kasten Jewelers as the Tahoe had returned. Officers met up in front of 5500 N. Berkeley, which is around the corner from Schwanke-Kasten. They observed two men in front of the store. The officer ran the license plate and it came back to a Ford dealership and came back as “no vehicle attached” and was not listed as stolen.

The two Whitefish Bay officers approached the two men in front of Schwanke-Kasten Jewelers and asked what was going on. A man, later identified as John Henson, informed the officer that he was there to buy his first Rolex, but every time he tries the door, it’s locked, and they don’t let him in. One of the officers asks him about the dealer plates on the Tahoe. He advises the officer that he plays for the Milwaukee Bucks, and that the Bucks players get vehicles from this dealership. Neither officer asked Henson or his companion for drivers licenses or any other identification.

The officer called dispatch to request that a Schwanke-Kasten employee come to the front door. The employee told the dispatcher to have the officer come to the back door. After my officer informed the Schwanke-Kasten Jewelers employee that it was a Milwaukee Bucks player, the employee came to the front door and let them in. The employee requested that an officer stand by as they looked at the Rolexes. Our officers refused, and left the store. The officers then left the area.

At no time did Whitefish Bay police make any notice to merchants on Silver Spring because of these incidents.

In light of what happened to him on Monday, Henson says he plans to speak to young people about the incident and how they should react