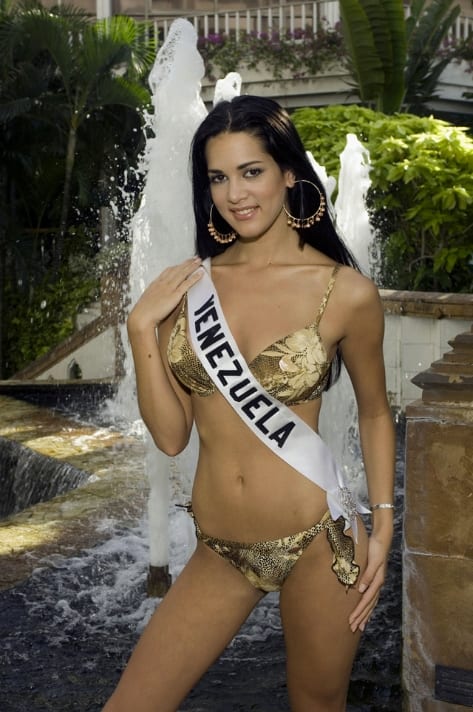 Caracas — Gunmen killed a former Miss Venezuela and her British-born partner in front of their young daughter in an attack that shocked the crime-plagued nation, authorities said Tuesday.
Monica Spear, a 29-year-old soap opera star, and Thomas Henry Berry, 39, were killed in what appears to have been a botched robbery after their car broke down on a highway in northwestern Venezuela late Monday, police and prosecutors said.
Their daughter, five-year-old Maya Berry Spear, was wounded in the right leg but was stable after receiving medical treatment after a crime that put a harsh spotlight on Venezuela’s soaring homicide rate.
Five people have been detained and were interrogated in connection with the killings, Interior Minister Miguel Rodriguez said after a televised meeting with President Nicolas Maduro, who vowed to use an “iron hand” to crack down on crime.
The family was driving on a highway when their car hit a blunt object that had been placed on the road, forcing them to pull over, said forensic police director Jose Gregorio Sierralta. There are suggestions that the object was deliberately placed there as part of a planned armed robbery.
Spear waved down a tow truck, which stopped to help on the road between Puerto Cabello and Valencia in the state of Carabobo, Sierralta said.
But as the two truck workers operated the crane, five armed men emerged on the road.
The truck’s operators fled to a police station about 1.5 kilometers (one mile) away while the mother, father and child locked themselves in their car in a desperate attempt to shield themselves from the killers.
But “the criminals fired multiple shots at the vehicle” before fleeing without stealing anything, Sierralta said.
Investigators impounded the couple’s car and took testimony from the two tow truck operators.
Spear, who was a quarter-finalist in the 2005 Miss Universe contest, appeared in the Miami-based Telemundo series “Pasion Prohibida” (“Forbidden Passion”) and “Flor Salvaje” (“Savage Flower”).
The dark-haired actress, who lived in Miami, was on holiday in her native Venezuela. She had posted videos of the countryside and herself horse riding on Instagram in the last couple of days.
Her husband was born in Britain but has Venezuelan citizenship.
“This is a massacre,” said Maduro, who vowed to curb the country’s runaway violence during his presidential campaign last year.
“This violence is a sickness that we have,” he said from the Miraflores presidential palace.
Maduro called some 100 mayors and governors to an urgent meeting on Wednesday to coordinate action against crime.
Venezuelans who work in movies, theater and TV called a rally for Wednesday in Caracas to denounce the oil-rich country’s epidemic of street violence.
Venezuela is deeply divided between supporters and critics of the late populist president Hugo Chavez and his successors. NGOs and the government give different figures on just how dangerous Venezuela is to live in. But Maduro made an appeal for this killing not to be used for political gain.
“I take my responsibility to the maximum,” the socialist leader said, warning the killers that “whoever wants to kill will see an iron hand.”
Venezuela has one of the world’s highest murder rates, with 79 homicides per 100,000 inhabitants in 2013, according to the non-profit Venezuelan Observatory of Violence.
The interior ministry, however, gave a lower murder rate of 39 homicides per 100,000.
Opposition leader Henrique Capriles, who refused to concede defeat to Maduro in presidential elections last year, reacted to the killings by calling on his rival to put aside “deep differences and unite against the lack of security, as one bloc.”
The beauty queen’s killing shocked fellow artists in Venezuela, a country which is passionate about soap operas and the Miss Universe contenders it regularly produces.
Actress Gaby Espino, who lives in Miami, said she would never return to her home country.
“This is the day-to-day life in our country. We have all left Venezuela, fleeing in fear, terrified because this is the reality of our country. And today it happened to Monica,” Espino told the Telemundo network.
“I love my country, but I won’t set another foot in Venezuela,” she said.
Venezuelan telenovela director Leonardo Padron said he was “absolutely saddened, horrified, speechless, over the murder of my dear Monica Spear! My God!”
Telemundo, a leading Spanish-language network in the United States, said in a statement that it was “deeply shocked and saddened by the horrible crime that hit our dear actress Monica Spear and her family.”
Jencarlos Canela, Spear’s American co-star and love interest in “Pasion Prohibida,” expressed grief on Twitter, writing: “I am speechless. I will miss you my friend @MonicaSpear.”
Addressing Spear’s daughter, he added: “My pretty, beautiful Maya, I love you. You are not alone!”