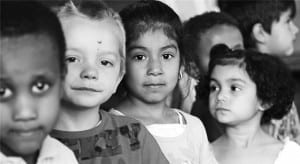 Unsurprising but important report confirms what people of color in Milwaukee already knew.

Milwaukee community leaders have been speaking out about racial disparities and the struggles of hard-working, well-meaning African-American families to get ahead for decades. Now, a new report from the Wisconsin Council on Children & Families confirms that Wisconsin has the largest gap between the well-being of white and black children in the country.

• Eighty percent of black children live in households below 200% of the poverty level, compared to thirty percent of Wisconsin’s white children.

• White adults in Wisconsin, age 25 to 29, are three times as likely to have an associate’s degree or higher, compared to their African-American or Latino peers.

The report paints a bleak picture of the lack of opportunity for children of color in Wisconsin and their barriers to receiving quality education and employment. Ken Taylor, the Executive Director of the Wisconsin Council on Children & Families, says these disparities must be addressed quickly.

“Dramatic racial disparities are hurting Wisconsin’s communities and our economy,” says Taylor. “Allowing these disparities to continue hurts us all, and our state’s leaders must renew their focus on reducing this gap.”

The report does lay out policy proposals and ideas to address Wisconsin’s racial disparities, including engaging families and communities most affected by disparities, analyzing major investments to effectively use limited resources, and ensuring that different programs aimed at reducing inequality are working collaboratively.

Wisconsin Council on Children & Families is a non-profit, non-partisan statewide advocacy organization. The full report can be found online at their website, www.wccf.org.