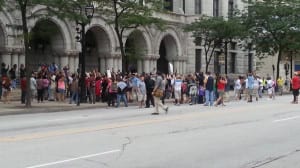 MILWAUKEE — As loved ones in Ferguson, MO said goodbye 18-year-old Michael Brown — shot and killed by a police officer in Missouri, a rally in support of Brown took place at the federal courthouse in Milwaukee this week.

Rally organizers in Milwaukee say they are calling upon the U.S. Department of Justice to begin a nationwide investigation of potentially systemic police brutality and harassment in minority communities.

Demonstrators outside the federal courthouse in downtown Milwaukee held a moment of silence for Michael Brown.

The incident involving Michael Brown has sparked a nationwide movement.

The rally at the federal courthouse began with about 20 people, including Ald. Milele Coggs, Ald. Russell Stamper II and County Supervisor David Bowen, lighting red and white candles and praying for Brown and others who have died in police incidents.

Before the march the crowd heard from speakers — including Alderwoman Milele Coggs.

The rallies in Milwaukee have focused not only on solidarity with the family of Brown, but also with families of those who have died in police custody in Milwaukee.