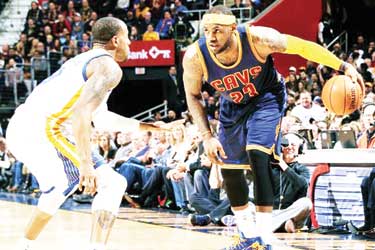 With their 104-90 win over the Houston Rockets, the Golden State Warriors advanced to the NBA finals for the first time in 40 years. Led by this season’s MVP Stephen Curry, the Warriors jump-shot centered offense silenced critics who were saying that jump-shooting teams don’t win in the playoffs. Shooting guard Klay Thompson and Curry shoot over 15 three’s a game, on average, and both shoot threes at around a 43% clip. Appropriately nicknamed the “Splash Brothers”, Curry and Thompson have the ability to shoot any team out of the arena in a matter of minutes.

The Warriors will be taking on the Lebron James led Cleveland Cavaliers, a team that many expected to compete for a championship coming into the season, but those expectations changed after injuries to Kevin Love and Kyrie Irving. While Irving has continued to play through the knee injury, he has been a shadow of his former self. Love, who was injured in the first round of the playoffs against the Boston Celtics, will not return to the basketball court until next season.

The most interesting matchup is how Cavaliers coach David Blatt will choose to guard Curry. Curry is averaging nearly 30 points per game in these playoffs and is a matchup nightmare with his speed and quick jump shot. If Irving does play close to starter minutes, it is doubtful that his knee will hold up to the strain of chasing Curry around multiple screens all over the court. James is considered one of the best defenders in the league, and his 6’8” frame should help him in closing on Curry, but he will tire quickly if forced to defend Curry for a seven game series. The likely scenario is Blatt will have Iman Shumpert or Matthew Dellavedova guard Curry for the vast majority of games, but will switch to James in late game scenarios when a defensive stop is needed. Shumpert is great defensive stopper but Dellavedova is a defensive nuisance who could potentially get into the head of Curry with his antics.

This is one of the more exciting NBA finals that we could have imagined. Curry stepped up this season and took the MVP crown from the preseason favorite James. Curry regularly takes threes from 30 feet away from the court, and the only thing better than a huge dunk is a long three hitting nothing but net. The Warriors are favorites heading into the game, by both odds makers and the general public.

Betting against the best player of our generation is usually a bad idea, but the Warriors are historically one of the best three point shooting teams of all time. Let’s not forget that three points are worth more than two.

Will the Warriors shoot their way into history? Or will Lebron further cement his legacy as one of the best ever with another NBA championship ring?

My prediction: Warriors win the series 4-3 in one of the most exciting series’ in recent memory.