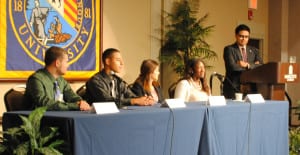 Milwaukee – Cristo Rey Network announced that it received a to $2 million grant from The Burke Foundation recently.

The grant is intended to support the startup of the Cristo Rey Jesuit Milwaukee High School, which would operate under the model of the Cristo Rey Network, a national grouping of Catholic, college preparatory high schools known for supplementing classroom time with real world work experience.

The high school aligned with a nationwide network of schools will open in the fall of 2015 on Milwaukee’s south side, the Midwest Jesuits of the Wisconsin and Chicago-Detroit Provinces and the Cristo Rey network announced Wednesday.

“The successful track record of the Cristo Rey Network and its 26 urban high schools across the country speaks to the transformative impact a Cristo Rey school could have on young people in Milwaukee,” said Andrew Stith, director of the Cristo Rey feasibility study initiative.

“I am excited about the tremendous potential of this new school for the young people who will attend,” he said in a news release. “Our goal is to provide students from modest means with a high-quality, values-based education rooted in the Catholic Jesuit tradition of academic excellence and leadership development.”

According to officials, the new school will most likely participate in the Milwaukee Parental Choice Program in which qualifying students receive a public voucher to attend private schools.