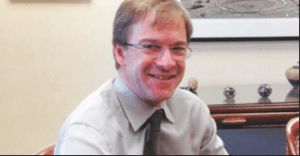 By Robert Miranda
Milwaukee County Executive Chris Abele gave an optimistic forecast for Milwaukee County during an interviewwith the Spanish Journal. Abele said that the county faces a $15 million deficit, however, he argues that this is far better than the over $80 million deficit projected several years ago. “I’m really happy with the way things are going with the budget, and I see good things happening in the coming years for the county”, said Abele.
Abele told the Spanish Journal that he is not increasing taxes nor is he raising fees. Abele is proposing a $1.3 billion budget for 2014. As Abele spoke about the budget, he noted that he is increasing Milwaukee County Transit routes. “I’m adding an additional 20,000 miles to MCTS service area”, said Abele. “One of the reasons why I’m moving to increase bus routes is so that workers who depend on the bus to get to jobs can get to those jobs”, continued Abele.
Abele also noted that he is allocating funds to increase efforts to move nonviolent offenders into less expensive alternatives to incarceration programs. He said it cost a lot of money to house someone in the House of Correction (HOC) for committing nonviolent offenses. “Nonviolent offenders can be placed in a program that cost much less and they can still be held accountable for their offense”, said Abele.
This move has upset Milwaukee County Sheriff David Clarke. Sheriff Clarke attacked Abele accusing the county executive of being on heroin and having hallucinations of being sheriff.
Abele states that Clarke is not a big supporter of shifting nonviolent offenders out of the House of Corrections. “I’m taking over $5 million out of his control designed for that purpose and placing the county in charge of dealing with nonviolent offenders. It’s a cost saving initiative and it frees up space at the HOC so that violent more dangerous offenders can be placed there rather than nonviolent one-time offenders who could benefit from alternative to incarceration”, said Abele.
Sheriff Clarke is quoted by FOX6 News as saying of Abele’s proposal, “he’ll have to sue me in court to get me to accept those cuts.”
The Milwaukee County Sheriff’s Office will be allotted over $70 million. Abele says that this will ensure that the counties freeways are well staffed and that the parks are properly secure. He also stated that he is working with the Milwaukee Police Department (MPD) and he is funding a program called Shot Stopper. The MPD program is designed to detect gun fire on city streets.
Milwaukee County employees will receive a two percent pay raise in the 2014 budget.
There are several County pools marked for closure in Abele’s budget. He said they are indoor pools and are very expensive to maintain. He says that the money saved will be reinvested into the Parks Department.
Kosciusko Park appears to be a benefactor from the savings that Abele is seeking.
During the interview Abele said that he is allocating $1.6 million towards Kozy Park for much needed improvements.
A public hearing on the budget is scheduled for November 4th at 4:00 p.m. It will be held at the Milwaukee County War Memorial Center.