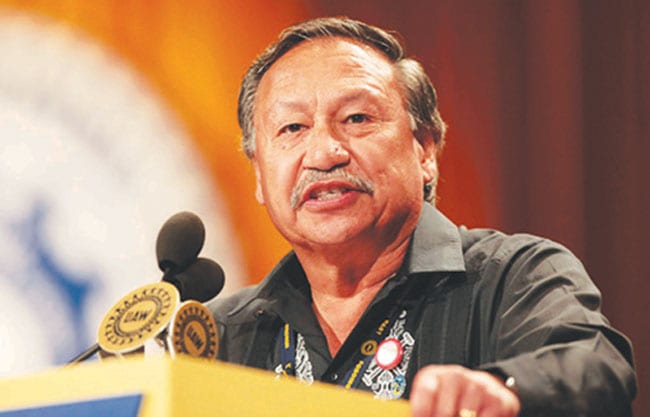 Rodriguez joined the UFW in 1973, after he met Chávez. For 40 years Rodriguez has been organizing boycotts and fighting for civil rights in the agricultural industry.

Today, the UFW has a majority of undocumented workers in its ranks working in America’s farm fields.

Rodriquez visited Milwaukee invited by the United Migrants opportunity Services (UMOS) to be the agency’s keynote speaker in celebration of UMOS 50th Anniversary.

In an interview with the Spanish Journal Rodriquez stated that he was excited to be in Milwaukee to take part in the UMOS 50th anniversary celebration.

“I am so happy to take part in UMOS celebration because for 50 years UMOS has done phenomenal work”, said Rodriquez.

The leader of the UFW went on to say that UMOS plays a key role in providing services for migrant families and supporting migrant workers. He also said that UMOS is a key partner in the struggle for dignity and the fight for the rights of the migrant workers.

“Although, back in the 1970s times were very hard and many were hurt because of aggressive actions by the police, today, things are still hard. The dogs, and bricks being thrown at us are not as common, we still must face tough political opposition to ensure our farm workers are protected and treated justly”, said Rodriquez.

Besides working so hard without benefits, farmers risk their lives and live day to day worried about their families, says Rodriguez. And today, the number of undocumented farm workers is much higher than ever before.

“I’m here not only to celebrate with UMOS the tremendous achievements of the great organization, but to show I support UMOS as we move forward into the future continuing this work of Justice”, said Rodriquez.