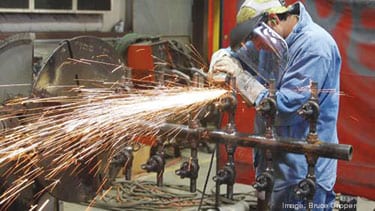 Madison – The shortage of qualified and/or willing workers is getting worse and is holding back Wisconsin’s economy, according to a semi-annual SURVEY

conducted by Wisconsin Manufacturers & Commerce (WMC), the state chamber of commerce. The SURVEY

Seventy percent of survey respondents report having trouble hiring employees, up from 64 percent in January and 53 percent a year ago. A lack of qualified applicants was the top reason given at 52 percent. Thirty-two percent say they are having trouble finding employees for all levels and fields.

Not surprisingly, labor shortage was the number one concern of business leaders when asked two separate questions on what is the top public policy issue facing Wisconsin (26 percent) and what is the top concern facing your company (27 percent). Health care affordability was second for both questions, but it was the top response when executives were asked to identify “what one thing state government could do to help your business.” Twenty-eight percent said “make health care costs more affordable,” 25 percent said “reduce/reform regulations” and 21 percent said “reduce taxes.”

The worker shortage and health care came up frequently in answers to the open-ended question “what do you believe is holding back the economy and job growth?” “Indecision, especially with immigration reform and health care,” was one response. Another was: “It has become so expensive and difficult to hire and retain employees that there is no choice but to automate and that limits job growth.”

“Wisconsin business leaders are becoming increasingly frustrated with the lack of qualified workers as well as the lack of action by politicians to address the issue,” said Kurt R. Bauer, WMC president/CEO. “The sad irony is that as the economy improves, there is greater demand for workers. But if businesses can’t find workers, then the economy can’t achieve its full potential.” Bauer also said health care cost increases are off-setting wage growth and contributing to wage stagnation.

Overall, 91 percent of respondents say Wisconsin is headed in the right direction, down from a high of 96 percent six months ago.

Other findings from the survey show the strong dollar is hurting more businesses than it is helping. Thirty-three percent say it is “somewhat hurting” or “hurting” versus 17 percent who say it is either “helping” or “somewhat helping.” Also, business leaders remain supportive of Wisconsin’s new Right to Work law by a strong 15 to 1 margin.

1,219 CEOs whose companies are WMC members. The survey was conducted by mail and email during the month of May. Of those, 306 responded.