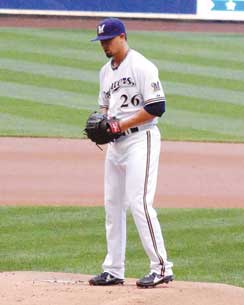 Difficult to Find Positives for Brewers

In what has certainly been a trying season for owner Mark Attanasio, the Brewers have continued their free fall as of late. Comfortably occupying last place in the central division, the Brewers are struggling to find wins against quality and weak opponents alike.

Ryan Braun has continued his descent since injuring his thumb last season (and returning from suspension for performance enhancing drugs), and is no longer a perennial National League MVP candidate. For a player who was hitting .298 or higher in every season but one since being called up to the majors, a sub .250 average is simply not acceptable. Jonathan Lucroy, who has often been hailed as the best catcher in the league by MLB insiders, has been hovering around the  .220 average while lacking pop to his bat and failing to take walks at the rate he was last year. Carlos Gomez, who remains one of the best defensive centerfielders in the league, has seen his production at the plate drop significantly since his heyday last season.

The lone bright spot, if there is one in a season that will likely see the Brewers finish 30 or more games below .500, is Jean Segura. After struggling to make consistent contact with the baseball last year, and often swinging at pitches he had no business swinging at, he has upped his average to .275 this year and has consistently found holes in the defense. Unfortunately, his bat still lacks any kind of power and he avoids walks like they are the plague. In today’s world of advanced metrics hitting .275 with a .300 on base percentage while not hitting for power is simply not acceptable, but it is promising to at least see his average jump over the Mendoza line.

What is left to look forward to for this Brewers crew? Maybe we can convince some poor team to take on Braun, Adam Lind, or Aramis Ramirez. Trading Lucroy isn’t out of the realm of possibility either with defensive whiz Martin Maldonado backing him up, but having two great defensive catchers at your disposal is not something to give up for cheap. Kyle Lohse, who has been abysmal this year, wouldn’t fetch an open pack of Winterfresh on the open market. Neither would Matt Garza, nor any of the younger pitchers that were supposed to be on extended tryouts this year. These tryouts have gone poorly with the possible exception of Wily Peralta, whose season long ERA of 4.00 is nothing to get excited about.

Counsell has shown patience in his role as leader of this disappointing team, but what an unfortunate position to throw a rookie manager. Perhaps the Brewers should take a hint from their rival in St. Louis and start hacking into other teams’ computers to access their files. Remember when the Cardinals complained about the “unprofessionalism” displayed by the Brewers after Milwaukee victories? I’d rather have my team untucking their shirts after victories than committing felonies that gets the FBI involved. I’m not saying, I’m just saying.