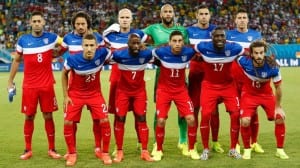 The United States lost 1-0 to Germany this afternoon at the 2014 World Cup, but still advance to the round of 16.

The U.S., which finished second, went through after Portugal defeated Ghana 2-1 in the group’s other match.

Later today at 4 p.m., Belgium — which has already advanced from Group H — plays South Korea, while Russia faces off against Algeria. Again, all three of these teams can still advance to the round of 16, which starts Saturday.