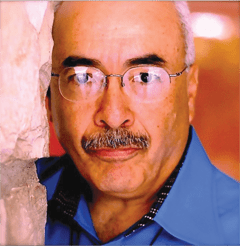 For the first time in 79 years, a Latino writer has been appointed the United States Poet Laureate. On Tuesday, March 3, that groundbreaking poet is coming to UWM.

Juan Felipe Herrera is an acclaimed writer spanning several genres, from novels to children’s books to his memoirs. Last year he served as the Poet Laureate for the state of California and this year he’s making history as the first Latino U.S. Poet Laureate. He will read from his works at UWM in the Student Union Ballroom from 7 p.m. on March 3.

Fellow UWM English Professor Brenda Cárdenas is excited for Milwaukeeans to hear Herrera’s work. “Many people think that poetry is inaccessible. They think it’s something they have to study formally, or they worry that they won’t know how to interpret it and are going to get it wrong. I think Herrera is one of the best poets to change that perception,” she said. “Without you even realizing what he’s doing, he’s going to have you believing that poetry’s not such a strange and foreign thing….That’s one benefit for Milwaukee: People who come out to this event will be able to access poetry through this person who really wants to share poetry with them.”

Milwaukee audiences can expect some bilingual poetry – Herrera often writes in both English and Spanish, and sometimes combines the two languages in one poem

– and to participate in the reading.

Bilingual poetry can be especially important for children – it makes them better communicators in both languages, said Kilwein-Guevara, who calls it “a passport to play with language, and it’s that passport that will get them to higher levels of communication skills.”

Herrera is very good at communicating with young audience members and has written several children’s books. Children might not understand all the words in a poem, Cárdenas said, but even before they begin speaking, they can understand the musicality of poetry and the emotion or playfulness behind the words of a poem.

“It might be that the child is simply accessing the beat of the poem, but won’t the child who hears poetry likely grow up to have an internal understanding that there’s rhythm in language?” Cárdenas said.

She and Kilwein-Guevara grew up around story-tellers and listened to poetry in English and Spanish when they were young. They use a combination of Spanish and English in their own writing, and said that Herrera inspired them.

“Bilingual children have access to two worlds,” Kilwein-Guevara said. “Not only can you function and communicate with people in different languages, it also gives you empathy for somebody who is different than you.”

Herrera has been invited to UWM to give the annual Boudreaux reading so he will be reading primarily for adults.

Herrera is the author of 30 books, including collections of poetry, prose, short stories, young adult novels and picture books for children. His many collections of poetry include “Notes on the Assemblage;” “Senegal Taxi;” “Half of the World in Light: New and Selected Poems;” “187 Reasons Mexicanos Can’t Cross The Border: “Undocuments 1971-2007;” and “Crashboomlove: A Novel in Verse.” His books of prose for children include “SkateFate;” “Calling The Doves;” “Upside Down Boy,” which was adapted into a musical for young audiences in New York City; and “Cinnamon Girl: Letters Found Inside a Cereal Box,” which tells the tragedy of 9/11 through the eyes of a young Puerto Rican girl.

The reading is sponsored by the Department of English through the Boudreaux Foundation, The Roberto Hernández Center and UWM Union Sociocultural Programming.

The reading is free and open to the public. Books will be available for purchase.