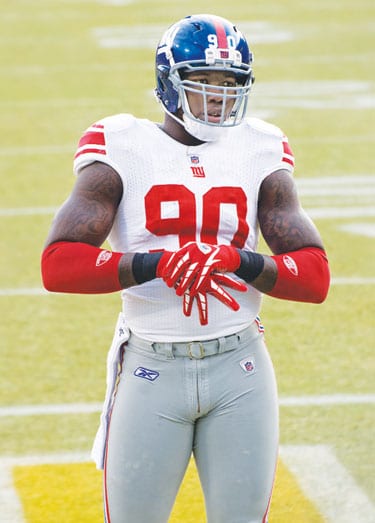 Admission: July Fourth fireworks have never been my thing. Don’t get me wrong, I enjoy fireworks as much as the next guy, for the first 5-10 minutes. After the first ten minutes it gets a bit redundant. Bang, colors shower down, bang, more colors shower down, repeat. While Jason Pierre-Paul (JPP) and CJ Wilson were celebrating their countries Independence Day something went horribly wrong and both ended up losing out on more than a good time.

JPP, the star defensive lineman for the New York Giants, had reportedly purchased a U-Haul van worth of fireworks and planned on celebrating his Fourth in style. Apparently, at least one of the many fireworks exploded in his hand, resulting in an injury that would eventually require the amputation of his right index finger. In addition to the lost index finger, JPP also suffered a fractured thumb. The New York Giants had offered a contract to JPP for up to $60 million dollars but that contract, like his finger, is off the table.

CJ Wilson is not a star player, and for this reason his injury has not received as much attention as the premature explosion courtesy of JPP. Wilson, however, will likely suffer much more than JPP will at the professional level. Unlike JPP, Wilson has never signed a big NFL contract and will certainly be without one in the future now. A fireworks accident resulted in Wilson, a cornerback for the Tampa Bay Buccaneers, losing two fingers. Wilson was an undrafted player who came into the league in 2013 and has yet to have a significant impact on an NFL team. Last year he was credited with four tackles, so losing him will likely not be a huge hit to the Tampa Bay defense.

Neither injury is supposed to threaten the career of the respective NFL players, but it will certainly affect their earning power in the years to come.

I am forced to question the logistics of a large population of untrained and likely intoxicated Americans handling what are essentially bombs in their backyards at least once a year? Why do we insist on going out and buying fireworks to shoot off into the night sky? Wouldn’t a toast suffice? Or maybe we can pour a little liquor out for the ones who fought for our freedom. I have never been one to shake my finger at festivities because there is nothing better than standing in a backyard on a beautiful July night, sharing a beer and a hot dog with the ones you care about the most. Still, how smart is this whole public fireworks thing? Almost everybody that I know has a story about how they saw somebody almost lose a hand handling fireworks, I know I do.

If we, as a country, continue to insist on shooting off fireworks every Fourth of July and New Year’s Eve, maybe it is time we start being smarter about it. I know for myself, I will be leaving the fireworks to the professionals on the shores of Lake Michigan.

Bang – colors and fingers falling to the ground.