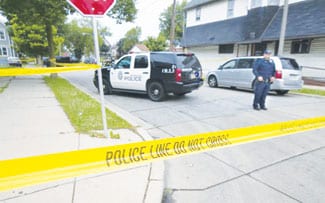 MILWAUKEE – Police say two people have been found dead on a south side street in Milwaukee.

Officers responded to a REPORT of some injured people about 5 a.m. Tuesday. When authorities arrived they found two people fatally shot.

Investigators at the scene say the victims may not have been killed at the location where the bodies were found on 5th and Author on Milwaukee’s south side.

The killings in the city has far outpaced anything seen in recent years. The city’s unofficial homicide total for the year is reaching 82, about double the NUMBER at the same point in each of the last two years.

If there are four more homicides, the city will MATCH 2014’s total of 86 for the whole year.

The most killings in the city in recent years occurred in 2013, when the year-end total hit 105

The two bodies have not been identified by authorities as of press time.