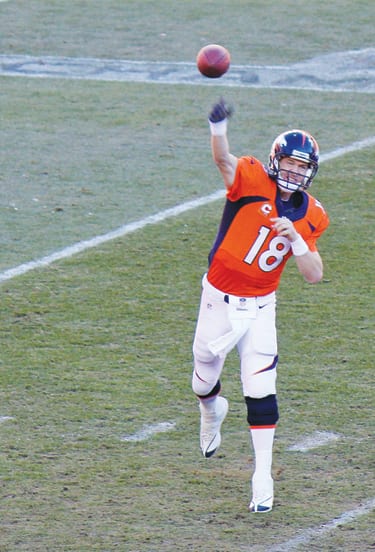 For the first time in his storied career, Peyton Manning had little to do with his team earning a shot at the Super Bowl. That honor goes entirely to its defense, where Demarcus Ware and Von Miller have combined for 18.5 sacks this past season. While 18.5 is nothing spectacular, the Broncos’ ability to get to the quarterback without blitzing is, and historically has been, the key to winning football games.

Everybody knows the key to beating Tom Brady is to get in his face while only rushing four players. Dropping eight into coverage will usually end with the quarterback having more than enough time to pick apart any defense, but the defenses that can win the four-on-five matchup at the line and get into the quarterbacks face make their coordinators job much easier. The teams that have matched up well with Tom Brady, and Aaron Rodgers for that matter, have been teams that can employ that defensive tactic. The New York Giants have given great quarterbacks fits in the playoffs by employing the same strategy. Here’s the thing: Denver was historically amazing at getting to Tom Brady in the AFC championship game. They hit Brady 20 times on Sunday, the most times a quarterback has been hit in one game in the last ten years. You can bet that Brady is still feeling the hits he took today.

When you have cornerbacks playing at the level that Chris Harris Jr. and Aqib Talib are, you really don’t need a great pass rush to make them look even better, but the Broncos have just that. Harris and Talib are two of the best cornerbacks in the league and are willing to back up their talk off of the field with their play on it.

The Broncos have opened as huge underdogs for this Super Bowl, some sportsbooks have them as much as a touchdown underdog to the Carolina Panthers, but remember that many viewed the New York Giants in the same way heading into their showdown with the (then) undefeated New England Patriots. The Giants weren’t expected to be much of a roadblock for the Patriots but a stout defense and some timely helmet-catches and the Giants were on their way to shocking the world. This defense has the same ability to disrupt its opponent, and Cam Newton will have to be at his best to beat this unit.

The Broncos can win this game. Peyton Manning may be a shadow of his former self, often being outplayed this year by Brock Osweiler, but running back CJ Anderson is more than capable of carrying the load (pun intended) for the offense. This team would be significantly more dangerous if they could use Demaryius Thomas and Emmanuel Sanders in a more prominent role, but Manning lacks the arm strength to get them the ball down the field and Osweiler lacks the quarterbacking ability.

Will the Broncos win? Check in next week to see my preview for the Carolina Panthers and my prediction for Super Bowl 50.