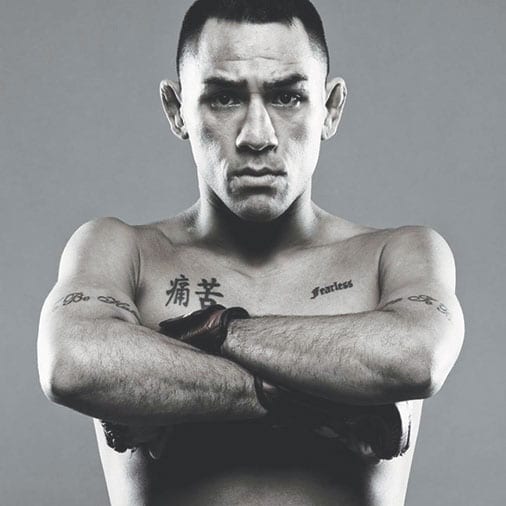 Emmanuel Sanchez first fell in love with fighting when watching “Ultimate Fighter” on Spike TV. Sanchez had not yet envisioned becoming the submission specialist he is today, nor had he developed the mantra he currently fights by: Train hard, eat right, go out and perform. Simple words that are easier said than done, but that hasn’t stopped the 11-2 Sanchez from performing, and succeeding, on one of the biggest stages in the world.

Originally hailing from Harvard, Illinois, Sanchez has been training in the Roufusport Martial Arts Academy in Milwaukee for three years. While training in Milwaukee Sanchez has discovered a few favorite eating spots in Thai BBQ and Transfer Pizza, though he can’t indulge his cravings as often as he’d like.

Sanchez is no stranger to being thrown into a fight at the last minute. His fight on Friday, November 6th against Justin Lawrence wasn’t set until just a couple of weeks ago. Lawrence was scheduled to battle Pat Curran in his hometown for Bellator 145: “Vengeance” but Curran had to bow out with an injury.  When Bellator had to find someone on short notice, they turned to Sanchez. Sanchez had already fought before with less than three weeks of notice and he is never one to turn down a fight. He stays ready by always being at the gym, always preparing for that phone call.

Despite the short notice, Sanchez predicts that he will beat the hometown hero in the first round, hopefully by knockout. Five of Sanchez’s eleven victories have come via submission, though, and only via knockout. A first round submission would be equally satisfying, I am sure. Sanchez claims he loves to fight on short notice, though I am sure he would prefer to have time on his side, rather than fighting against him.

Sanchez has trained in Brazilian Jiu Jitsu (BJJ) at Roufusport, and because of that his ground fighting is his strongest style. Though he respects Lawrence’s striking and wrestling capabilities, Sanchez believes that his BJJ background will prove to be the deciding factor. BJJ is a favorite of many fighters these days, including Women’s Bantamweight Champion Ronda Rousey.

With only one fight remaining after this bout on his contract with Bellator, Sanchez hopes that UFC will come calling sooner rather than later. Though he made clear that he has been very fortunate to fight for Bellator, the obvious next step would be to fight for Dana White’s promotion.

Sanchez said that Lawrence needs to be eliminated, and that is exactly what he is going to do at 8 o’clock, Friday on Spike TV. Crediting the people that have helped him along the way, the support he gets from Milwaukee, and his coaches, Sanchez expects to further strengthen his record.

Will Emmanuel Sanchez overcome the short notice and the crowd and stand tall over Justin Lawrence?