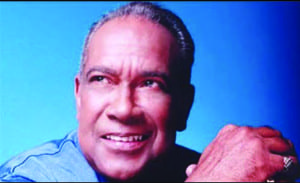 SAN JUAN, Puerto Rico — Puerto Rican salsa legend Cheo Feliciano died in a car accident early Thursday, prompting the governor of the U.S. territory to declare three days of mourning.  Feliciano was alone in his Jaguar when he hit a light post before dawn in the northern suburb of Cupey. Police officer Jorge Hernandez Pena, who is overseeing investigation of the crash, said in a phone interview that Feliciano was not wearing his seatbelt.

He said it is unclear what led to the crash, adding that officials did not find any drugs or alcohol in the car.  His wife, Socorro “Coco” Prieto Leon, told reporters that Feliciano had been at a casino Wednesday night.

Feliciano, a member of the Fania All Stars, was one of the most recognized salsa singers, with hits including “Una en un millón,” ”Mi promesa,” and “Contigo aprendi.” He was a member of the Fania All Stars and established his own production company in the 1980s.  Puerto Rico Gov. Alejandro Garcia Padilla declared three days of mourning, saying, “Today, Puerto Rico lost one of its greatest voices.”  The music community also mourned.

“Cheo, my friend, I’m in so much pain. You will always be one of my heroes,” tweeted New York salsa musician Willie Colon.  Feliciano was born in the southern coastal city of Ponce and formed his first band when he was about 8, playing instruments made from cans, according to a February 2000 interview he gave online music site descarga.com.

Feliciano’s father struggled to find work as a carpenter, and his family moved to New York when Feliciano was a teenager.  Shortly after arriving, Feliciano joined a local band as a percussionist and became friends with music giants including Tito Puente.  On Oct. 5, 1957, Feliciano married Prieto, a Puerto Rican dancer, and that night, gave his first concert as a singer with the Joe Cuba band.

A decade later, he left the band and then collaborated with Eddie Palmieri on his album, “Champagne,” but succumbed to heroin addiction shortly afterward and withdrew from the spotlight for nearly three years.  He returned to his native Puerto Rico for rehab and then joined the Fania All Stars in 1972. That same year, he released “Cheo,” a solo album that is considered one of his best.

In the mid-1980s, he launched his own production company called Coche Records and produced five albums.  To celebrate his 50 years as a musician, he performed in New York’s Madison Square Garden in 2008, singing alongside Palmieri and others including Papo Lucca and Ismael Miranda.

Feliciano had been hospitalized last year for pneumonia and was fighting cancer.  Feliciano is survived by his wife and four sons.