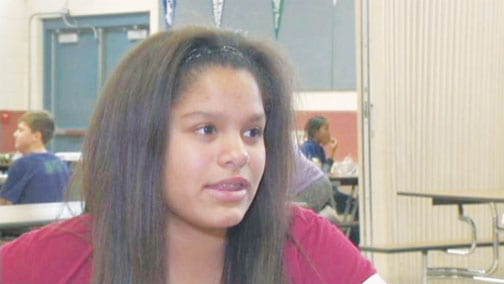 RACINE – A 5th grade student in Racine is thanking his lucky stars and his 11-year-old friend is receiving high praise for saving the 5th graders life.

Nevaeh Russo and Kamari Andrews were having lunch at S.C. Johnson elementary, when Kamari began choking on a quesadilla.

Nevaeh told Milwaukee WISN that Lamari started pointing to his throat and drooling a little bit and then the teacher called and said ‘Oh my God are you choking?’ And he said ‘Yeah.’

That’s when Nevaeh got up and  without even thinking performed the Heimlich.

“I got up, and then I put my hands around him, and I just did that,” Nevaeh said.

“I was going to die,” Kamari Andrews said.

Nevaeh Russo is being credited with saving his life.

Nevaeh and Kamari have been friends since the first grade. They’re now fifth-graders at S.C. Johnson Elementary School and sit across from each other every day at lunch.

Kamari says he thanked Nevaeh for taking action and his family may get her a Christmas present.

But, Nevaeh says she’s already received the best compliment ever, her mom called her a super hero.

Nevaeh said she learned the Heimlich maneuver two years ago when her own step-dad used it on her when she was choking on steak.

Nevaeh and Kamari said they hope everyone learns the Heimlich maneuver because it truly can save lives.