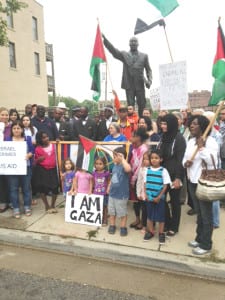 Milwaukee – Milwaukee, WI – Several groups came together to rally in support of Palestinian resistance and to call an end to the killing of children in GAZA.

Israel’s ground invasion of Gaza, which began July 17, continues and unannounced to the people of the United States, the government has provided Israel with $225 million in military hardware to continue its assault against GAZA. The Milwaukee Palestine Solidarity Coalition, who organized the rally, said the rally was organized to continue to denounce Israel’s war crimes against the Palestinians.

Despite the criticism, American media has been complicit in painting the humanitarian crisis as a two-sided conflict reflecting the strong bias of America’s Pro-Israel lobby. Israel is the largest recipient of foreign aid, receiving more than $3.1 Billion annually in military aid from the United States government.

This spending continues at a time when 38 American municipalities have filed for bankruptcy (source, GoverningData.com), thousands of refugee children languish in detention on our own border, and public opinion is turning against US-backed foreign conflicts.

“There is no question that the incessant bombing of non-combatant men, women and children are war crimes”, stated coalition member Student Minister William Muhammad of Muhammad Mosque #3, referring to the Israeli “Dahiya Doctrine” of indiscriminate attacks on Palestinian targets.

The coalition is calling for local leaders to debate the issue of US support for this aggression given the economic crisis in our own cities; divestment from companies doing business in the US that support Israeli aggression, reminiscent of the Anti-Apartheid movement; and to expose the Pro-Israel bias of the American media to influence government policy and public opinion.