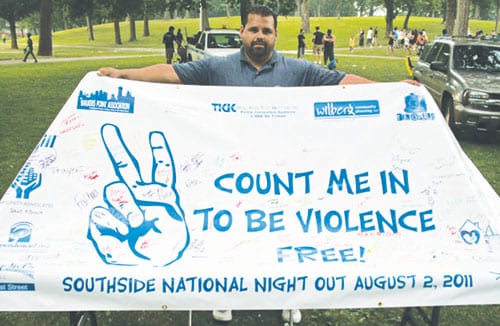 National Night Out at Kosciuszko Park

Kosciusko Park was just one site out many others in various communities across the city highlighting crime prevention this week during the annual National Night Out event.

National Night Out is held across the country on the first Tuesday in August. It’s an event to encourage police-community parternships and heighten awareness of local crime, drug and violence prevention.

It’s an annual community-building campaign, bringing police and residents together for a number of fun activities.

From Sheboygan to Milwaukee to Wauwatosa, there were several National Night Out events that included block parties, cookouts, safety demonstrations and games.

In Kosciusko Park up to 1,000 people participated listening to music, interacting with Milwaukee Fire and Police representatives. The Milwaukee County Sheriff was also represented.

Milwaukee County Supervisor Peggy Romo West hosted the National Night out at Kosciusko Park. “This is one of my favorite events of the year”, said Romo West.

At Veterans Park in Sheboygan, folks were expected to participate in the annual “Walk Against Crime.”The hope is to help people take back their neighborhoods from crime.

There are about 16,000 events like these around the country.