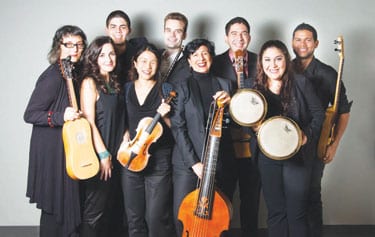 The exuberant sounds of Latin-American music will meld with glorious Renaissance and Baroque compositions for the opening of Early Music Now’s 29th season, 5:00 Saturday, October 17, at the UWM Helene Zelazo Center for the Performing Arts.

Rumbarroco’s performance style is based on the transformative passion of Iberian and Latin-American music, incorporating the rhythmic vitality that has persisted in this music in its many diverse genres from the 1100s to today. Their unique approach reveals how European Classical music is revitalized by African rhythms and instruments, while also highlighting the European influence on Latin American folk music and Afro-Hispanic music through performance with Baroque instruments.

The ensemble will demonstrate their unique style at several residency programs between October 15 and 18, including activities at St. Anthony School, Escuela Fratney, St. Francis of Assisi Church, Milwaukee Catholic Home, String Academy of Wisconsin, and UW-Parkside.

The Milwaukee residency is supported by generous grants from the City of Milwaukee Arts Board and the Arts Midwest Touring Fund, which also supports the UW-Parkside program.

Ms. Gutiérrez will provide insights into the ensemble’s style at a 4:00 lecture preceding the 5:00 concert. When asked for a perspective on the cultural significance of this program, she had this to say:

“In present-day Spain, cities such as Seville, Granada, and Cordoba still reflect the hybrid culture of medieval Christians, Sephardic Jews, and Moors that once flourished throughout the region known as Andalusia. North African Moors (Muslims) conquered Spain in the early 8th century. Over the next seven centuries, they created a thriving melting pot of culture: science, philosophy, agriculture, art, architecture, and music. This socio-religious convivencia (“live and let live”) started to come apart in the 1480s, when one of the largest diasporas in history began. Many Jews and Muslims were exiled or forced to convert to Christianity. Others migrated to Central and South America in the late 15th and early 16th century. Muslims were among the first Africans traded as slaves in the New World. These individuals brought with them their native hybrid culture, which then blended with that of the indigenous tribes already in Latin America, creating a second unique cultural melting pot.

“Our concert celebrates this musical fusion of races and cultures, called mestizaje, from its roots in medieval Spain to modem Latin America. We would like especially to illustrate the influence of Spanish Early Music in Mexico and Venezuela, the parallel genres developed, and the re-creation of Early Music in a Caribbean interpretation.”

Ticket prices for this 5:00 October 17th concert at the UWM Helene Zelazo Center for the Performing Arts range from $29-$46 for adults, and $10-$15 for students, and are available online at www.earlymusicnow.org, or by phone at 414.225.3113. Online and phone orders close Friday at noon, but general admission tickets may be available at the door.