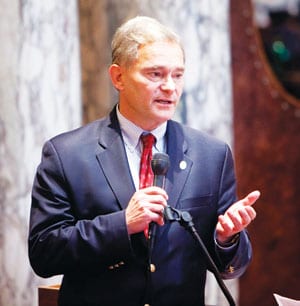 In one instance, “WEDC awarded millions of dollars in state tax credits based on promises of job creation to two companies, Plexus Corp. and Eaton Corp. Both of these companies then laid off Wisconsin workers and sent their jobs to other countries” said State Representative Robert Wirch.

Wirch went on to say that “after being granted up to $17 million in WEDC awards, Plexus laid off 116 workers at its Neenah facility and sent those jobs to a number of other countries.  Eaton was awarded up to $1 million in tax credits by WEDC, laid off 163 employees at a Pewaukee site and sent their jobs to Mexico, and then received an additional award of up to $1.36 million from WEDC.  News reports also revealed that executives with the two companies have donated nearly $20,000 to Walker’s political campaigns”.

“I am shocked to learn that under GovernorWalker’s leadership 26 loans totaling more than $124 million were approved by WEDC without so much as a staff review”, said State Representative Peter Barca.

Barca went on to say that he thought it was “outrageous that the Board of Directors is just learning for the first time the enormous liability we face due to the careless and irresponsible approach WEDC leadership has taken in carrying out their responsibilities”.

Barca continued by saying “This is yet another example of how senior WEDC officials have kept the board and Wisconsin taxpayers in the dark about serious problems surrounding the governor’s jobs agency”.

“As a board member, I will continue to push for full transparency and accountability at WEDC. The people of Wisconsin need to have assurances that their taxpayer money is not unnecessarily at risk and that waste, fraud and abuse are not going on at this agency”, said Barca.