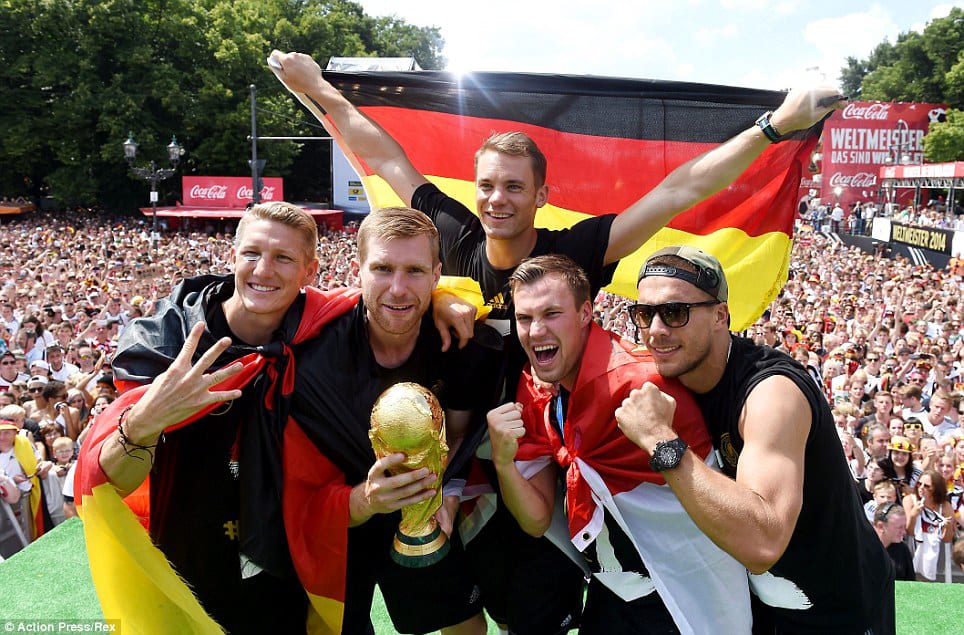 At a party 24 years in the making, hundreds of thousands of Germans showed their admiration and adoration for their World Cup winners in a parade to the Brandenburg Gate on Tuesday.

The players, in matching black T-shirts bearing the number “1,” lapped up the love by playing up to the estimated 400,000 people packing the “fan mile” in front of the landmark.

Fans began arriving overnight to secure good spots to welcome home coach Joachim Loew’s team and the trophy. Germany’s fourth World Cup, the first since 1990, crowned years of work by Loew to modernize the team, and followed near misses at recent tournaments.

At a stage set up at the Gate, Mario Goetze, the scorer in the 1-0 win over Argentina in the final on Sunday, was greeted with deafening cheers by the sea of fans waving black, red and gold Germany flags.

Midfielder Toni Kroos led the crowd in a chant of “Miro Klose” — a tribute to veteran striker Miroslav Klose, whose two goals took his World Cup tally to 16 and made him the tournament’s all-time leading scorer.

As the players waited to take their accolades, the fans welcomed each of them with a chant of “football god” — giving Bastian Schweinsteiger, Thomas Mueller, Goetze and Klose the loudest cheers.

“We’re just mega-proud of this achievement, after standing here in 2006 and 2008 as third and then as second — and now we’ve finally done it after this long journey, with this sensational team,” defender Per Mertesacker said.

There were problems with the sound system, meaning most of the players’ words were lost to the crowd. The supporters didn’t mind, though, and cheered even louder as defender Jerome Boateng, back in his hometown, shouted: “I can’t hear you!”

The team plane landed at Tegel Airport in midmorning after flying low over the “fan mile.”

Captain Philipp Lahm led the team off the aircraft holding the trophy aloft, to a chorus of “Football’s Coming Home” from fans on the airport’s viewing terrace.

He was followed by Schweinsteiger, draped in a German flag and sporting a bandage over a cut under his right eye, the result of a tackle in the final.

From the airport, the team set off on a two-hour trip to downtown Berlin in a bus painted with the years of Germany’s World Cup victories: The previous occasions were in 1954, 1974 and 1990.

The team changed shirts and climbed aboard an open-top truck for the last part of the trip to the Brandenburg Gate, crawling through the crowds at snail’s pace. The festive crowds followed in the wake of the bus as it passed.

People traveled to the celebration from all over the country: “They’ve all taken their holidays to come here. It’s absolutely crazy,” Uhlig said. “We were behind the stage where the bus pulled up. Just incredible.

Berlin resident Katrin Fels, who brought her daughter, said: “We knew it would happen. It was clear from the start of the year that we had the best team. It’s perfect, perfect for all generations.”

Munich also was getting in on the act, with Germany’s large contingent of players from Bundesliga champion Bayern Munich heading for the Bavarian capital after the Berlin celebrations. Bayern and the local government planned a reception at the airport.