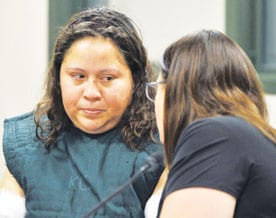 The mother forced her daughter to drink an entire bottle of liquid Motrin followed by a bottle of liquid Tylenol, Hernandez Alvarez is said to have given Javier Tylenol and teething pain tablets before suffocating him.

“The defendant said to police that she held the bag and the pillow over her son’s face, until he stopped shaking,” said Police.

Hernandez Alvarez then allegedly approached her daughter and suffocated her, also with bags.

Hernandez Alvarez allegedly killed her daughter in the same manner as her son.

After failing to kill herself with alcohol and pills, the prosecution says Hernandez Alvarez began cutting herself.

The father of the children found all three upon returning to home around 3:10 a.m.

Hernandez Alvarez is due back in court for an initial appearance on Thursday, September 17th.