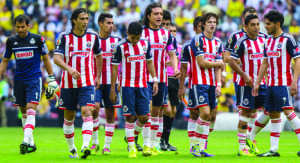 MILWAUKEE – The Milwaukee Brewers and Miller Park will host popular Mexican soccer club C.D. Guadalajara, affectionately known throughout the world as Chivas, and Swansea City A.F.C of the English Premier League on Wednesday, July 16, in what will be the first-ever professional soccer match at the stadium.

One of the most historic and successful clubs in Mexico, Chivas has captured 11 First Division titles in Liga MX and has raised two Copa México trophies. Additionally, the 108-year-old team is the only club in Mexico to exclusively field Mexican players, a concept that has made Chivas a steady contributor of players to the Mexican National Team. Standout players include Omar Bravo, Jesus Aldo DeNigris and Rafa Marquez Lugo. The team is managed by Carlos Bustos.

Established in 1912, Swansea City became the first Welsh team to play in the English Premier League after earning promotion in 2011.  In 2013 they won the Football League Cup Final, which earned them a spot in the 2013-2014 UEFA Europa League.  Swansea finished in 12th place in the EPL in the 2013-14 season and is led by Manager Garry Monk and Ivory Coast forward Wilfried Bony, the team’s top scorer with 17 goals.