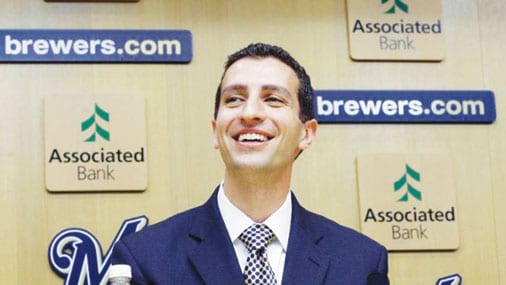 The six-week search by the Milwaukee Brewers to find a new General Manager has concluded with the hiring of 30 year old former Houston Astros assistant General Manager David Stearns. Stearns, a 2007 Harvard graduate, will replace longtime General Manager Doug Melvin, who will move into an advisory role at the conclusion of this season.

Stearns is an advanced metric believer, something that is required by most teams these days, and should fit in well with the Brewers philosophy. For years the Brewers had ignored advanced metrics while building their baseball team, despite claiming to do just the opposite. Advanced metrics are often thought of hand-in-hand with the film and bestselling book “Moneyball”. In reality advanced metrics are much more difficult to grasp than the film would indicate, but essentially it assigns wins-added metrics to every available statistic. For that reason, players who used to hit a lot of home-runs and produce a lot of runs-batted-in are no longer the most sought after free agents if they are unable to play quality defense or run the bases in a timely manner.

Stearns is expected to give a shot of youth, literally, into the Brewers front office. Star outfielder Ryan Braun is actually over one year older than Stearns, but does not see that being an issue. “It’s encouraging that (Stearns) has been through a rebuild, he’s seen it through,” Braun said. “Obviously the Astros are having a good year this year, so he’s seen them get back to where we intend to get to hopefully sooner rather than later.” Braun is one of five players who are older than their new General Manager.

Hiring Stearns is the kind of hire that the Brewers need to make if they hope to make a splash in the upcoming seasons. Gone are the days of old “baseball guys” who chew tobacco in the dugout and look at the basic statistics after games. The organization does not need another manager like everybody else out there; we needed one that can think outside of the box, one that can come into baseball with a different perspective. Yes, the Stearns hiring could crash and burn and the Brewers could be in the same situation again in two or three years. Given the applause from around the league, though, I am hoping that Stearns will lead this organization for years to come.

Do not be dissuaded by a 30 year old General Manager and a 44 year old manager in Craig Counsell. Yes, there are plenty of managers out there who are older than those two combined, but Counsell and Stearns have the ability to lead the Brewers into a new generation.