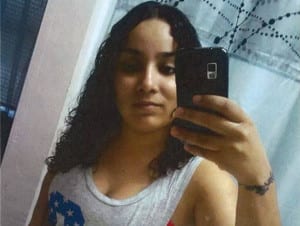 JEFFERSON CO.—The body found in a cornfield in the Town of Ixonia late in March has been identified as 23-year-old Alejandra Guzman-Flores of Milwaukee.

Alejandra was last seen by her family on October 5, 2013.

FOX6 News reports Alejandra’s body was found along a stretch of North Road — six-tenths of a mile south of County Trunk Highway CW.

The man who discovered the body didn’t want to talk with FOX6 News on camera. However he fianl say off camera that after spotting several crows hovering over an area of the field, he walked to where the crows flew around and spotted the body. Fox6 News reports that “there was no clothing on the body except for sandals”. They also report that the in identified man said “the body looked like it had been there for awhile”.

Jefferson County Sheriff’s investigators, along with the Sheriff’s Office’s Crime Scene Unit are investigating at this time.

If anyone has information regarding Guzman-Flores’ death or had contact with her on or around October 5, 2013, you’re strongly urged to call Jefferson County Sheriff’s Office Detective Tim Behselich at 920-674-7314.