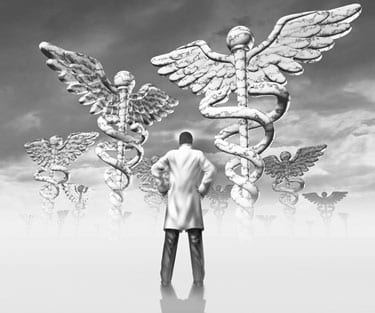 A Framework for Patient Harm

A group of doctors has decided to rewrite the Hippocratic Oath.

The ancient pledge charges physicians with applying “all measures that are required” to help the sick. The American Society of Clinical Oncology wants to add a caveat — “unless those measures are too expensive. Then let the patient die.”

The oncologists’ group has developed a “conceptual framework” that relies on cost-benefit analysis to determine the most “valuable” treatments for different patients.

Sounds innocent enough. But healthcare outcomes cannot be reduced to cost-benefit calculations. By focusing on the cost of a treatment — rather than its potential benefit — the oncologists are allowing dollar signs to dictate whether a patient lives or dies.

Under ASCO’s framework, new treatments will be judged “based on clinical benefit, side effects and cost.” Those are the exact same measures health insurers use in limiting patient access to treatments. Indeed, ASCO wants insurers to use its calculator to “evaluate the relative value of new treatments” as they develop benefit structures and adjust premiums.

Such “controls” could include shifting drugs to the highest cost-sharing tier of an insurance plan or requiring patients to try older, cheaper drugs before receiving the most cutting-edge therapies.

Never mind that the Obama Administration has warned “placing most or all drugs that treat a specific condition on the highest cost tiers discourages enrollment by individuals based on age or based on health conditions” is discriminatory.

The oncologists are effectively asking insurers to discriminate against cancer patients — in direct contradiction of the Affordable Care Act’s intent.

Further, ASCO has concluded that a treatment that can keep patients alive for weeks or months has no value.

The framework assigns zero value to any treatment that doesn’t increase survival by 20 percent. Right away, the formula would deem numerous modern treatments for cancer worthless.

That 20 percent figure is arbitrary. Take a lung cancer patient who is alive today because of the accumulation of treatments that never made that arbitrary threshold. Cardiologists hailed a just approved drug that reduces the risk of death from heart failure by 20 percent as revolutionary.

Between 1987 and 2000, various AIDS therapies increased patient life expectancy by less than 20 percent a year. Had ASCO’s framework been instituted then, thousands of AIDS patients who benefited from those treatments wouldn’t be alive today.

ASCO defends its guidelines by claiming that expensive new treatments have sown “unrealistic patient and family expectations that lead clinicians to offer or recommend some of these services, despite the lack of supporting evidence of utility or benefit.” America’s healthcare system can’t afford limitless spending on cancer treatments, the group says.

True, spending on cancer drugs has risen. In 2014, it topped $100 billion. But that’s just 1 percent of U.S. healthcare spending.

Moreover, these medicines are worth their price tags.

Successful drug therapies reduce overall costs by diminishing the need for future medical attention. According to a study from the Center for Value and Risk in Health, specialty drugs “tend to confer greater benefits and hence may still offer reasonable value for money.”

Successful treatment also benefits the nation. Cancer survivors have contributed $4.7 trillion to the economy since 1990, simply by living and working longer.

By valuing treatments based on costs rather than the benefit they provide to patients, the ASCO framework violates both the letter and spirit of the Hippocratic Oath. It should be scrapped before it puts patients in danger.

Robert Goldberg is vice president of the Center for Medicine in the Public Interest.