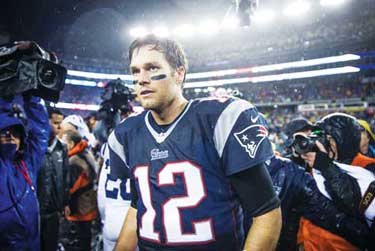 How on God’s green earth is slightly deflating footballs suspension worthy? That is the question I have been asking myself after the announcement made by the NFL on Monday. Tom Brady would be suspended for 4 games without pay; the New England Patriots would be fined $1,000,000, in addition to forfeiting a first round draft pick in 2016 and a fourth rounder in 2017. These sanctions were announced after the release of the Wells report last week that said it was “more likely than not” that Brady had something to do with footballs being inflated to 10.5 psi instead of the league mandated 12.5 psi.

Remember the controversial suspension last season, when Ray Rice was suspended for two games after knocking his fiancée out in a hotel elevator? Somehow slightly deflating a football is, initially at least, twice as bad as punching a woman in an elevator so hard that she loses consciousness. After the public outrage at the initial suspension, the Ray Rice penalty was later increased under the guise of “discovering new evidence.”

The game that was played with underinflated footballs was the AFC championship game between the Patriots and Indianapolis Colts, a game the Patriots won 45-7. The question that I pose is why aren’t quarterbacks allowed to deflate footballs to their desired level, as long as the ball isn’t flat? When an NFL team is on offense they only use footballs provided by their team, so the deflated footballs would not affect the opposing team. Suspending a player who was “more likely than not” involved in deflating footballs is a joke.

NFL commissioner Roger Goodell has long been the major dent in the NFL shield. When he suspends players he does so saying that they were disrespecting or damaging “The Shield” which is a reference to the NFL logo. The way Goodell now doles out punishment is a crock. He releases information that indicates that a player may be guilty of a transgression, waits to digest the public reaction, and then decides the punishment. That is the definition of unprofessional, yet he does this in the public eye with each major faux pas. Imagine if you did something that could be interpreted as uncouth at your workplace and instead of your boss pulling you aside and asking you your opinion before deciding on the punishment behind closed doors, they decided instead to announce what you did to the office, gauge their reactions, and then announce your punishment.

I sincerely hope that Tom Brady and the Patriots fight this decision tooth and nail. Patriots’ owner Robert Kraft has long been the strongest supporter of Goodell, even offering to fund the majority of the Wells report. I expect that to change, and that may be the nail in the coffin for other NFL owners to turn on Goodell as well. The NFL owners and players may actually be able to agree on something, and I sincerely hope they do.

To reiterate: Ray Rice was initially suspended for two games after knocking out his then-fiancée. Tom Brady was suspended for four games after being found “more likely than not” partially responsible for the Patriots offense playing with underinflated footballs. This is your NFL.