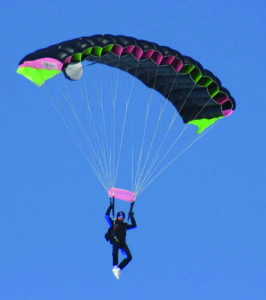 STURTEVANT — A skydiving accident near Sylvania Airport in Racine County, resulted in the death of one man.

The Racine County Sheriff’s Office said two jumpers missed their mark at the airport around 5:30 p.m Sunday. Deputies conducting the investigation said the victim’s parachute became entangled with another skydiver’s canopy above 56th Road in Sturtevant.

One of the jumpers, Fredrick H. Platt Jr., 44, of Racine, died at the scene.  Platt was a Tandem Instructor, AFF Instructor and coach at Skydive Midwest.

The second skydiver,  Neil A. Kulman, 27, sustained injuries considered to be minor after hitting some area trees. Kulman also works at Skydive Midwest as an AFF Instructor, Tandem Instructor, Coach, Videographer and a Senior Rigger.

According to Skydive Midwest, Platt was a highly experienced skydiver having amassed more than 2,000 jumps during his skydiving career.

The accident is still under investigation.