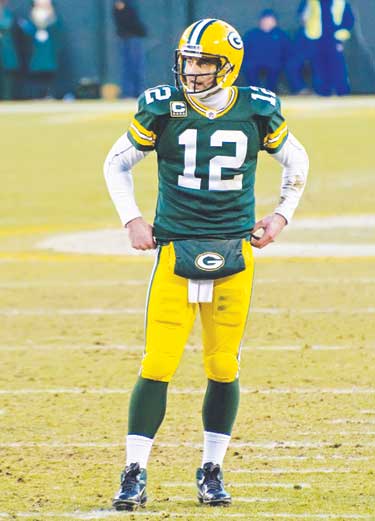 Aaron Rodgers is 31 years old and is clearly the best quarterback in the NFL today. Within the five remaining years on his contract, Rodgers fully expects to return to and win another Super Bowl and thinks that this year’s team has the talent to get it done.

“I think the talent is definitely there,” Rodgers said during an interview Tuesday. “But just like last year, you’ve got to see how the team comes together.”

Rodgers has not watched last year’s NFC Championship game against the Seattle Seahawks, what’s the point? He knows how close they were to returning to the Super Bowl against a team that they had already beaten earlier that year. He knows that had he not injured his calf a few weeks prior, the offense would have been much deadlier and likely would have put up more points. He knows that if players had stuck to their assignments, it would have been the Green and Gold in the Super Bowl. Rodgers would not gain a thing by re-watching that game.

The fact is that Rodgers is returning healthy this year, so is Eddie Lacy, so is Jordy Nelson, and so is Randall Cobb. The most dangerous offense in the NFL is returning healthy and intact while the defense has been injected with some young blood. Ha-Ha Clinton-Dix is returning after a stellar rookie campaign and expects to be entrenched as the playmaking safety. Clay Matthews will continue to wreak havoc from all over the field in his new hybrid role, and Julius Peppers will attempt to stave off father time for one more year and turn in another vintage performance.

The Seattle Seahawks will be returning as well, with confidence in spades I am sure. Fluky wins over the Packers seems to be their calling card, which will make it that much more exciting when the Packers beat them in Lambeau Field on September 20th. Sure, pull out some lucky plays when playing in Seattle, but try it here in Green Bay and you are walking out a loser.

The Dallas Cowboys will return a solid team from last year, minus offensive player of the year DeMarco Murray. They also finished last year on a sour note after Dez Bryant couldn’t hold on to a Hail Mary pass that would have put Dallas in prime position to score the winning touchdown late in the fourth quarter. Tony Romo and Bryant are both great players, and their offensive line is one of the best in football. Defense is their Achilles heel though and that is the one weakness you don’t want to have when facing Rodgers and company.

Will the Packers win the Super Bowl after falling agonizingly short last year? Time will tell. But does this team have the talent to hoist that trophy one more time? Absolutely, positively, yes.