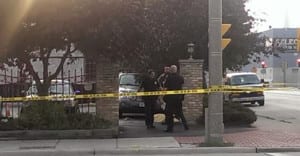 MILWAUKEE – A suspect about to commit a crime was shot dead and others involved were later appended by police in a robbery attempt earlier this week.

The incident took place in a parking lot near 2nd Street and National Avenue. A robbery suspect was shot and killed by one of his intended victims.

Residents in the area said that shortly after the shooting the neighborhood was flooded by police officers as a body laid covered on the floor.

Police say early Monday morning four suspects were attempting to rob a group of victims when one of the victims pulled out a handgun and shot one of the suspects. The suspect who was shot died at the scene — and the three other suspects fled.

Milwaukee police believe these suspects may be responsible for several recent robberies in the Southside.

Police said several arrests have been made.

Authorities are still working to identify the person who died.