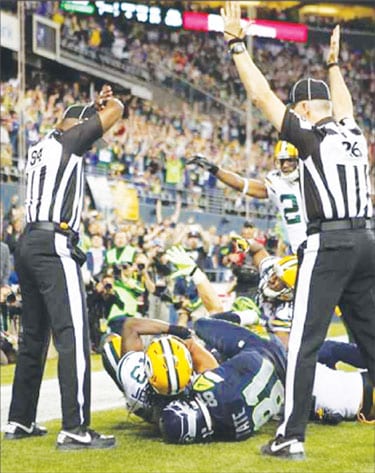 Each week another team making up the gauntlet that was the early season schedule for the Green Bay Packers falls by the wayside. Much has been made of the early season struggles of Aaron Rodgers and Mike McCarthy led squads, but starting the past three seasons 1-2 will do that. Being one of the marquee teams in the NFL, the Packers are often slated to face against other marquee teams from the previous season, a quiet way that the NFL tries to prove early on which teams from the previous year are still contenders or are now pretenders.

First it was the Chicago Bears, opening their season at Soldier Field and welcoming the rival Packers. Though considered favorites by a considerable margin, an away game against a division rival is never an easy game, and the Bears proved that by providing the Packers a stiffer matchup than many expected. The Packers pulled out a 31-23 victory that left many fans grumbling about the defense, much like in previous seasons. Seattle would look much more formidable if the Green Bay defense was unable to hold strong.

When the Packers welcomed the Seattle Seahawks to Lambeau Field in week two, many fans were filled with nervous excitement. The Seahawks had managed to steal (and I don’t use that word lightly) two games from the Packers in very questionable circumstances in the previous years. The most recent one was the NFC championship game that broke green and gold hearts across the world. The game was rarely in doubt as the Packers thoroughly dominated the Seahawks on both sides of the ball and came away with a 27-17 victory. This victory would firmly set the Packers as the team to beat in the NFC and entrench them as Super Bowl favorites with or without Jordy Nelson.

A team that the Packers had never beaten at Lambeau Field arrived in Green Bay for week three in the Kansas City Chiefs. The Chiefs had ruined the Packers’ chance at a perfect season just a few years ago when they beat them at Arrowhead Stadium to give the Packers a 13-1 record. The Packers were beat physically that day, and it gave the rest of the league a blueprint for how to beat them come playoff time. This time around, the Packers would not be dominated in any fashion and went home that night with a 38-28 victory that was not as close as the final score indicated. At one point in the game Aaron Rodgers had more touchdown passes (four) than the Chiefs had first downs (one).

Colin Kaepernick and the San Francisco 49ers welcomed the Packers to California for week four. Kaepernick in particular had proven to be the bane of Dom Capers’ existence to this point in his career and he intended on continuing that trend. He never really got rolling though, whether in the air or on the ground and the 49ers finished with less than 200 total yards. The Packers once again dominated the opposition and finished the game 17-3, leaving no fans concerned about the ability of this defense. 49er fans were chanting for TV announcer and former Dallas Cowboy quarterback Troy Aikman late in the game, something that the Packers would have surely welcomed on this demolishing-demons tour.

Though it is far too early to make any real playoff predictions, I think it is time for fans to start preparing for a game or two on the frozen tundra come playoff time.