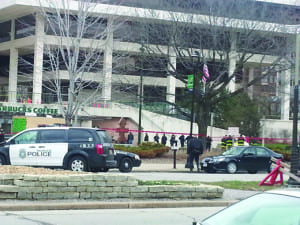 MILWAUKEE -A Milwaukee police officer shot and killed a man at Red Arrow Park near Starbucks.

Police Chief Ed Flynn said Milwaukee police got a call about “trouble with a suspect” in the park.

Flynn said an MPD officer approached the suspect lying on the ground, helped him up, conducted an interview and began patting him down when a struggle ensued.

The MPD officer pulled out his wooden baton, but the man took the baton and began beating the officer with it. The MPD officer then shot the man, striking him several times.

Flynn said the suspect has not been identified. News reports are indicating that the the man may have been homeless.

The 38-year-old officer is a 13-year veteran of the force. He was taken to Froedtert Hospital, where he was treated for head injuries and released.

A new state law signed by Gov. Scott Walker last week requires an external investigation into shooting such as this.

The officer involved has been placed on administrative duty pending the results of the investigation.

A Starbucks spokeswoman said the coffee shop should be open this week.