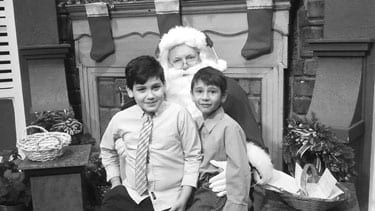 by Television and Video productions Students at MATC

Hi I’m Mariella Godinez-Munoz, (MG) Hoy Wisconsin Today TV Show Anchor, and in this edition I have an Interview with Greg Clapp (GC), a MATC student in the television program.

Every year second year students are responsible of the production of letter to Santa a TV show where the kids read their letter to Santa and at the same time presents to the viewers the variety of cultures and different stories about how Christmas is celebrate around the world, This year Greg Clapp (GC) was selected as the Executive Producer.

MG: Why do you think you were selected to be the EP?

GC: I think I was elected Executive Producer of Letters to Santa because my classmates knew that I would be fair and work my hardest to make sure we produced a quality program.

MG: What does it mean to you to be the EP for Letter to Santa this year?

GC: It means a lot to me that my peers believe that I was the best person to guide this year’s Letters to Santa.

MG: What are your responsibilities for Letter to Santa?

GC: For Letters to Santa I am in charge of coordinating all production efforts from start to completion. This includes keeping everyone on time for deadlines, making sure that the show has continuity, and guiding the overall vision for the show.

MG: Tell me how important teamwork is for this production?

GC: Without teamwork, a production of this size would be impossible. It takes a group of at least three students to shoot a segment and more than ten students to do a studio production.

GC: It’s hard to pick just one experience. We came together as a class to produce a show that will air all over Wisconsin and Northern Illinois and be seen by thousands of people. Not many students anywhere in the world can say that.

MG: What did you learn from this experience and how will this help you in your career?

MG: Tell me why you will recommend the TV and Video Production Program at MATC?

GC: The TVP program at MATC is awesome. The instructors are very knowledgeable and genuinely care about their student’s education. The fact that students get to work on shows that air on MPTV is also a huge benefit. As students, we also have access to equipment that professional’s in the field use every day. Thanks you for this interview, Greg

Letters to Santa will air on December 21, 22, 23, and 24 at 5:30pm each day at MPTV Channel 36.1. Stay tune to watch letter to Santa 2015, I have to mention that more Latino kids from our community are participating in this show stay tune to watch for your relatives in the show.