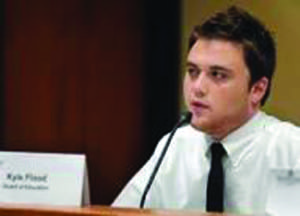 KENOSHA – UW-Parkside law enforcement officials released a cell phone video in which 19-year-old Kyle Flood, who is on the Kenosha Unified School Board is shown to be under the influence as he is engaged in destructive behavior.  Flood was issued a drug paraphernalia and vandalism citation.  Flood is the youngest member of Kenosha Unified’s school board.  UW-Parkside Campus Police report that the teen was cited for two incidents at University of Wisconsin-Parkside.

Flood was cited for possession of drug paraphernalia and later handed a vandalism citation for breaking down a door at a campus apartment.

Flood did not return calls for an interview to the Spanish Journal.

KUSD parents have been critical of Flood. Many are saying that as an elected member of KUSD, he is responsible for helping to shape the future of education for Kenosha’s kids.

“It definitely makes parents wake up and say, ‘Wait a minute. Who’s making the decisions for our students in our district?” Lacroix said.  Flood appears to not be speaking about the matter to the media but did state to TODAY’S TMJ4 that he could not speak about the matter.

“I can’t discuss it. I’m fighting it in court,” he told TODAY’S TMJ4.  “I can’t comment. I’m pleading not guilty. I can’t comment on this.”  This week The Kenosha Unified School Board voted 6-0 to censure Flood.